Recent versions of Google Android may have built-in support for encryption, lock screen passwords, and fingerprint authentication. But it’s always possible for an operating system to be more secure… and since Android is open source, we’ve seen several attempts to tighten security.

Samsung’s KNOX software is one effort, while Silent Circle has created an entire fork of Android called Silent OS for its Blackphone smartphones.

Now there’s another option, and this time it’s available as a custom ROM you can flash on select smartphones. There’s no need to buy special hardware (although only two phones are currently supported. 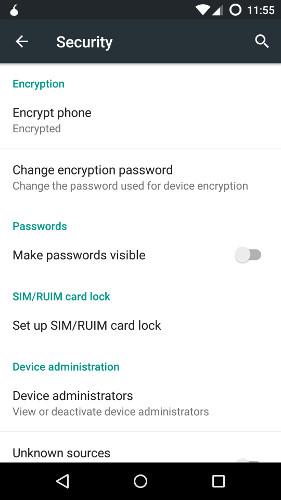 CopperheadOS is an open source version of Android that’s based on CyanogenMod. The initial alpha of Copperhead OS uses CyanogenMod 12.1/Android 5.1 as its base… but it includes a number of tweaks designed to make the operating system more secure.

One of the most obvious differences between CopperheadOS and stock Android is that the lock screen and encryption passwords have been separated: now the password that unlocks your screen can be different from the one that decrypts your storage. This allows you to use a relatively short and easy-to-type password for your lockscreen and a longer, more complex string of characters for your encryption password.

Other changes may not be visible to most users, but in general CopperheadOS is designed to help protect the device from malware, offer frequent security updates, and emphasize security over other features (so some CyanogenMod features may not be available).

CopperheadOS can also be used without Google Mobile Services, but it’s possible for users to sideload the Google Play Store if they’d like. The operating system also supports third-party app stores including F-Droid.

The initial alpha of CopperheadOS is available for the Google Nexus 5 and Samsung Galaxy S4 smartphones. Since the software is open source, it should be possible to port it to other devices in the future. Meanwhile, the developers eventually plan to sell phones with the software pre-loaded, possibly started with a Copperhead version of the Google Nexus 5.

3 replies on “CopperheadOS wants to bring better security to Android”