Computers come in all sorts of shapes and sizes these days. And we’re not just talking about desktop, notebook, and tablet. That smartphone in your pocket is basically a mini-PC with a processor, storage, memory, and a few other goodies like a touchscreen.

So it’s not surprising that we’ve seen many companies take the guts of a smartphone and stick them into a tiny stick-shaped device that you can use to turn a TV into a PC.

Now a company called FocusWill wants to take the same basic approach — but instead of hiding the guts of a low power PC in a stick, they’re packing them into a keyboard.

The CoolShip is basically a PC-in-a-keyboard. It has everything you need for a basic computing experience, except a monitor.

There are speakers built into the case and even a touchpad built into the space below the number pad. Around the back you’ll find ports for VGA, HDMI, USB, Ethernet, and other functions, and under the hood you’ve got WiFi.

What’s particularly interesting about the CoolShip is that it’s designed to be upgradeable. While it’s expected to ship initially with a Rockchip RK3066 processor, 1GB of RAM, and 4GB to 8GB of storage, the developer plans to offer upgrade modules in the future that will let you pop out a card and replace it with a faster processor, additional memory, and other improvements.

In other words, you shouldn’t have to replace the whole kit just because you want to improve performance. This could make the CoolShip cheaper for customers than some other mini PC options in the long run, and it helps cut down on e-Waste.

FocusWill has a working prototype which runs a customized version of Android 4.0 called CoolShip OS. But the company is hoping to raise money in order to ramp up production and keep the device affordable.

The company is running an Indiegogo fundraising campaign with a goal of making $10,000 in 25 days. You can reserve a CoolShip device for a pledge of $89 or more. The first units have an estimated delivery date of April, 2013. 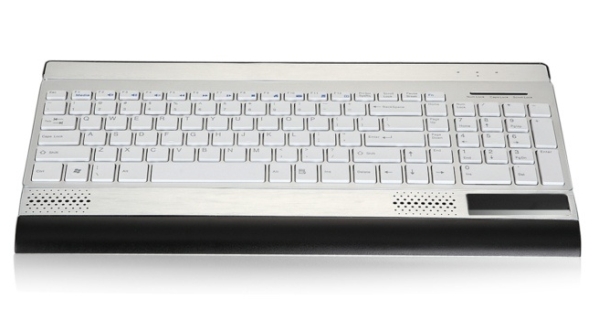 Overall the CoolShip seems like an intriguing concept — and it’s possible you could get Ubuntu or other Linux-based software to run on the device. The developers of PicUntu already offer a custom version of Ubuntu designed to play well with the Rockchip RK3066 ARM Cortex-A9 dual core processor.

But there are a few reasons to be a bit concerned about this product. For instance, the FocusWill website says the computer has “chocolate keys,” which I assume is supposed to mean “chiclet-style” keys.

Or maybe the idea is just that it’s a tasty PC-in-a-keyboard.