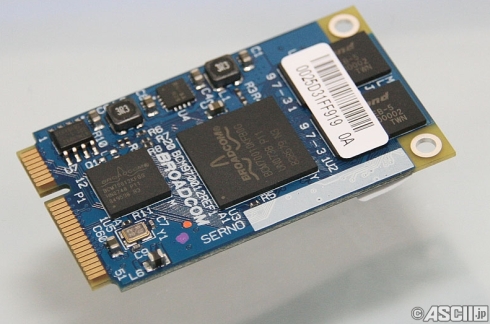 When Adobe launched a public beta of Adobe Flash Player 10.1 yesterday, the company released a list of graphics cards that could work with the software to enable hardware-accelerated HD Flash video playback. Along with graphics cards from NVIDIA, ATI, and Intel, the Broadcom Crystal HD Enhanced Media Accelerator was on that list.

The Broadcom video accelerator isn’t a standalone graphics card. Rather, it’s a low cost add-on for netbooks and other notebooks that enables HD video playback on low power machines that wouldn’t otherwise be able to handle 720p and 1080p content. The HP Mini 110 is the first netbook I’m aware of that ships with an optional Broadcom HD accelerator, but a number of users have been picking up the cards on eBay and installing them in netbooks from other manufacturers.

And now we’re starting to see reports indicating that the Broadcom Crystal HD card does indeed help netbook users display Flash video from sites including YouTube at resolutions up to 1080p. Duekey posts in the Adobe forums that it helps to skip the HD button in YouTube and instead append &fmt=37 to the end of the video you want to watch. And MyHPMini forum member neonkoala says that he was able to watch 720p movie trailers on YouTube with smooth playback.

If you have a Broadcom video accelerator in your Intel Atom powered netbook and you’ve installed Flash Player 10.1 beta, let us know how it went in the comments.