Before email was something you could access on the web, on your phone, or via Outlook, there were a handful or primarily text-based email applications such as Elm and Pine.

One of the first popular email utilities to feature a graphical user interface was Eudora, created for Mac computers by Steve Dorner in 1988.

Qualcomm acquired the software in 1991 and eventually developed MS DOS and Windows versions of the software, but stopped developing it by 2006 at a time when the email landscape looked very different.

Now Qualcomm has worked with the Computer History Museum has released the source code of Eudora so that anyone can use it for free for personal or commercial purposes (as long as you don’t do anything that infringes on the trademarked Eudora name). 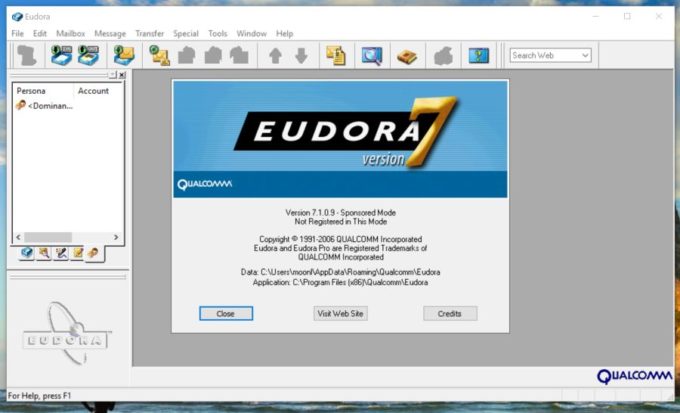 This isn’t the first time there’s been an open source version of Eudora: after Qualcomm ceased actively developing the software there was an effort to create a Eudora OSE (Open Source Edition) application based on Mozilla’s Thunderbird software. But it wasn’t really Eudora since it had a different design and wasn’t fully compatible with Eudora.

What’s different this time is that Qualcomm has transferred ownership of the code, trademarks, and copyright to the Computer History Museum, which is making the source code for the last version developed by Qualcomm available.

Code is available for both the Mac and Windows versions of Eudora, although the Mac version won’t run natively on modern Apple hardware and operating systems (although you may be able to run it using an emulator.

The Windows version, on the other hand, is said to run with “only minor problems” on Windows 10, although some features including handling of Unicode and spell-checking would need to be retooled in order for Eudora for Windows to become fully functional again.

And since the source code is now available for anyone to examine or modify, maybe we’ll see forks of Eudora that add new features or fix compatibility problems.