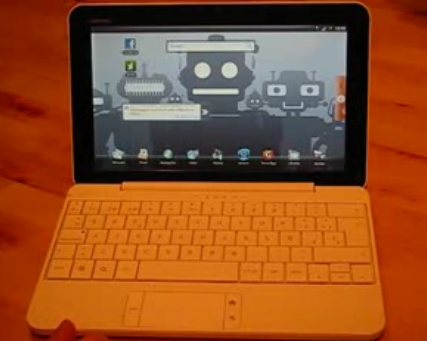 The Compaq Airlife 100 isn’t widely available yet, but Chippy at UMPC Portal got his hands on a pre-release unit and he’s posted an unboxing and hands-on video of one of the first so-called Smartbooks.

The device has a 1GHz Qualcomm Snapdragon processor, 512MB of RAM, 16GB of flash storage, and 3G and WiFi capabilities. Design-wise, it looks an awful lot like a slightly thinner HP Mini 1000 netbook, which makes sense, since HP owns the Compaq brand.

The main difference between the Airlife 100 and similar smartbooks like the Lenovo Skylight, is that they have ARM-based processors, built in 3G connectivity, and the ability to receive incoming communications even when they’re in suspend mode. In other words, just like a smartphone, you can get text messages, email, and instant messages even when the lid is closed.

As expected, the device ships without access to the full Google Android Market, but you will be able to download some apps from a third party web store that will most likely be managed by wireless internet providers. The web browser seems to have been tweaked to look more like a desktop web browser, although here’s no support for Adobe Flash video yet.

You can check out Chippy’s video after the break. He’s also planning to hold a live video session to take questions tonight at 10PM German time (which is 4PM Eastern Standard time).