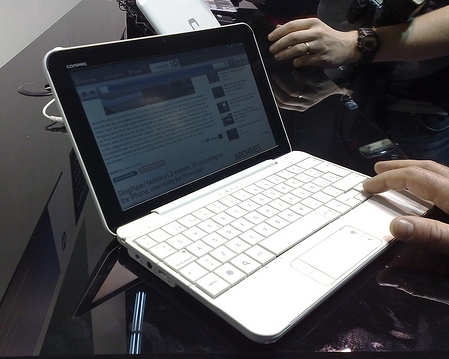 Chippy says the user interface looks good and works well with the touchscreen. He was impressed with the build quality, keyboard, and light weight. Overall, the Compaq Airlife 100 looks identical to the prototype I saw at CES last month. The primary difference is that now we know Telefonica will be offering 3G service for the Airlife 100 in Spain. No word on distribution in other countries yet.

In terms of hardware design, the Airlife 100 looks a lot like an HP Mini netbook with a similar keyboard and display. But the Windows key has been removed and the touchpad buttons have been tweaked to work better with Android.

You can check out my hands-on video from CES after the break.