A new voice-controlled smart home speaker showed up at the FCC website, and while it looks a bit like an Amazon Echo, the new Jupiter II smart assistant is actually a product from Taiwanese equipment maker Compal Electronics.

The cylindrical device is described as an “all-in-one Smart Assistant” and features a camera, an array of 8 microphones with far-field voice detection support, and 2.1 channel speakers. There’s also a wide-angle camera and support for a range of wireless communication technologies.

It’s not clear when the Jupiter II will hit the streets, how much it will cost, or even what it will be called: Compal typically manufacturers hardware for other companies, which means you rarely see the Compal name on products that sell in stores. 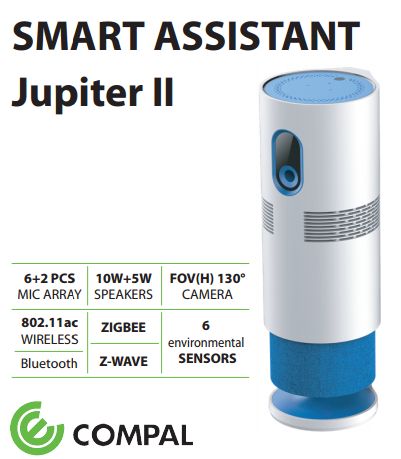 Here’s what we do know about the Jupiter II smart assistant. It has:

The Jupiter II comes with Ostro Linux pre-installed and Compal says it can detect a voice from “several meters away,” in any direction, capture high-definition video or images, or perform video analysis including facial recognition or event detection.

So it seems like the Jupiter II could act as a sort of Amazon Echo, but it could also be used as a security camera, among other things. There’s no word on what kind of voice assistant software the system uses, but with both Amazon and Google offering tools for porting their respective voice assistant software to third-party hardware, it’s not like Compal or its partners would have to reinvent the wheel.