Most modern smartphones have separate cameras on the front and back, allowing you to snap selfies or shoot pictures and videos of the world around you. But the front-facing cameras are often inferior.

Taiwanese manufacturer Compal’s CHEESE concept phone has just one set of cameras. But the phone has a foldable display that allows those cameras to face forward or back.

Spotted on the IF World Design Guide website, it’s unclear whether this phone will ever move beyond the concept stage. But the technology certainly exists to produce a phone like the Compal CHEESE. 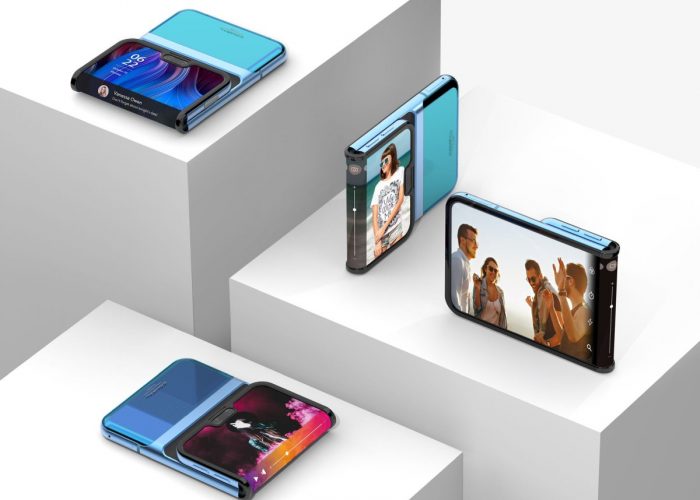 In fact, we’ve already seen some real-world smartphones that use a single camera system. The Asus Zenfone 6 and Zenfone 7 have cameras that rotate to face the front or back. And the Royole FlexPai 2 has a single camera system and a outward-folding display that allows you to use the device in phone or tablet modes, with the cameras available in each.

The CHEESE concept is a little different in that it’s a tall phone with a flexible display that’s clearly designed to let you use the device as a phone or a camera, but not as a tablet.

When folded, the top third of the screen wraps over the back of the phone, giving you a device that looks a bit like a camera with a grip. But the cameras are actually on the grip section — the same dual cameras that face forward in phone mode now face outward when you want to take a picture.

Fully folded in this way, the screen is divided into three portions, allowing you to use the largest section of the screen as a viewfinder while letting your subject see themselves in the part of the screen facing them. The side edge of the display can also be used as a camera shutter button and other functions. For example, you could slide your finger up or down the side to zoom in and out.

Compal notes that the side display could also be used to show notifications when you’re not taking pictures.