Some dual-screen laptops are really more like dual-screen tablets that forego a physical keyboard to make room for the second screen. While Microsoft and Dell have come up with workarounds, like a detachable keyboard that rests on top of one display when you want to type, the Compal Armer laptop takes a different approach.

At first glance, it looks like a standard notebook computer with a display and keyboard. But the area below the keyboard isn’t just a touchpad and palm rest. It’s a second screen.

Pull the primary display forward so that it touches that second screen (and hides the keyboard), and you’ve got a workstation for digital artists. Push the screen back and you’ve got… a fully functional laptop.

When you’re using software for video editing, painting, or CAD applications, the bottom screen can display your color palette, scrubbing or mixing tools, or other elements to complement the software running on the primary screen.

It’s not clear if or when the Compal Armer laptop will come to market — it recently won an IF Design Award, but Compal is a contract manufacturer, which means that if and when this particular device ever sees the light of day that will be because some other company hires Compal to build it.

But according to the awards listing, the computer has a stylus that tucks into the side of the laptop when it’s not in use, the lower display measures 13.7 inches across, and the top display is a touchscreen. That’s about all we know about the specs at this point. 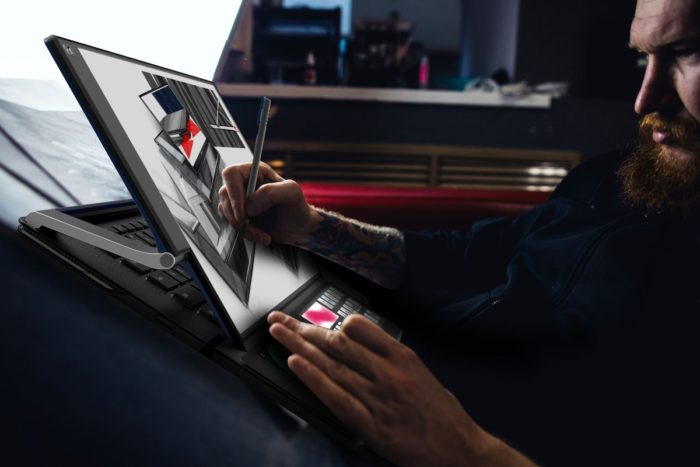 But it is one of the more interesting ideas I’ve seen for placing a second screen on a laptop… one that sort of reminds me of a mobile version of Microsoft’s Surface Studio all-in-one desktop.

Like the Surface Studio, the Compal Armer probably isn’t the best solution for every computer user. But I could definitely see the appeal for a certain subset of content creators.

Theoretically the second screen could also come in handy for other purposes — but I suspect it would have limited utility for gamers, since your hands would cover much of the screen if you were using the keyboard (although folks who prefer a gamepad could probably benefit from moving chat boxes, maps, or other content to the second screen.