Want to try out a new Android game, but not sure if you want to download and install it first? Soon you might not have to: Google is rolling out a bunch of new features for Android game developers, and one is a new service that lets users tap a “try now” button from a search window to play a game without downloading it.

You won’t be able to do this with all games though… just the ones that pay for placement, because the new feature is actually a new type of ad which Google calls Search Trial Run Ads. 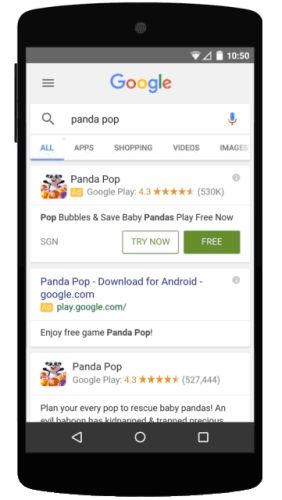 When a user find one of these ads, they’ll be able to click the “try now” button and play a game for up to 10 minutes.

The ads will only appear for users connected to WiFi, and the games will stream to your mobile device over the internet. If you like the game, there’ll be an option to visit the Google Play Store and install it when you finish.

Other new features for game developers (and users) include a new Indie Corner of the Play Store, where users can find games from independent developers, improved analytics tools for developers, and a video recording API that lets developers add a recording button to their games so that users can record and share their gaming sessions from within the app.