CrossOver is a utility that allows you to run some Windows programs on a Linux computer. The company behind CrossOver has been working on an Android version that allows you to run Windows software on an Android phone or tablet… but now that Android apps can run on Chromebooks it turns out that installing CrossOver for Android also lets you run Windows programs on a Chromebook.

CodeWeavers hasn’t released their Android app yet, but the company has posted a video showing the Steam game client and Windows game Limbo running on an Acer Chromebook R11. 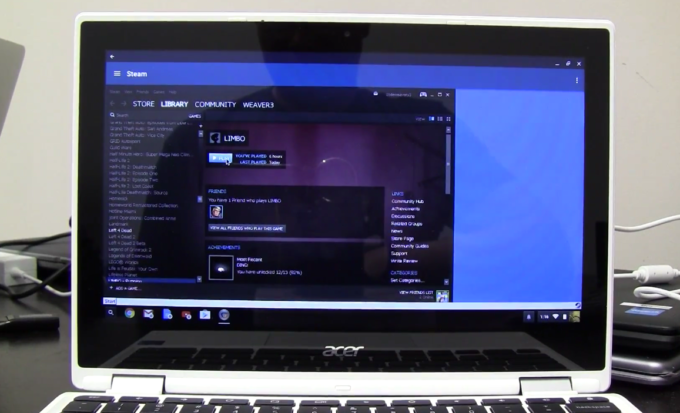 There is one small catch: CrossOver for Android only works on devices with x86 processors. Most Android phones and tablets have ARM-based processors and can’t run the software. But most Chromebooks launched to date have Intel chips — which could dramatically increase the number of devices capable of taking advantage of CrossOver once Android app support is more widely available (right now only a few Chromebooks support the feature), and once CrossOver is actually available to the public (right now CodeWeavers just says you can send in an email if you want to be notified when it’s available).

CrossOver is basically the pro version of WINE, an open source Windows emulation layer for Linux computers. CrossOver has some features that aren’t available to WINE users and may support some software that doesn’t run in WINE, but CodeWeavers also contributes code to the open source project.

It’s worth noting that there are plenty of Windows programs that do not run in either WINE or CrossOver. Personally my holy grail has always been QuickBooks: if I could run it on a Linux machine I’d be about 30% more likely to try using Linux full-time.

Still, the addition of Android app support to Chrome OS makes Chromebooks a whole lot more useful… and support for even some Windows apps could go a long way toward making computers like the Acer Chromebook R11 into a single computer that you could use for a very wide range of activities including Android or Windows gaming, Windows productivity tasks, or Chrome OS web browsing and media consumption.