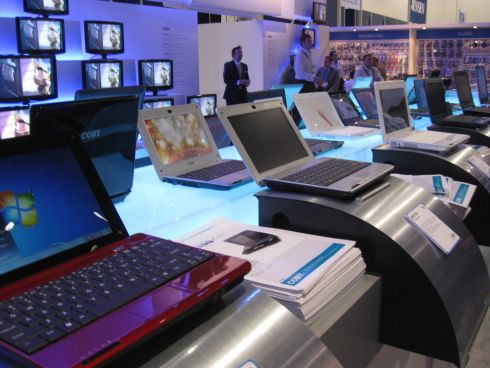 It’s been exactly a year since I spotted Coby’s lineup of 7 to 10 inch netbooks at CES in 2009. In that time, I’ve never found a single person who purchased a Coby netbook. But that’s not your fault. The netbooks were never made widely available. But when I caught up with a Coby rep today, he told me that the company has sold small quantities to distributors in the US. And when I say small quantities, I mean, a few thousand, tops.

But Coby is hoping to up its game this year. The company manufactures the netbooks overseas and has relatively low production costs. In most of the markets where Coby competes, this gives the company has a slim advantage because it doesn’t have to outsource production. But netbooks are low profit margin machines, and when you add Windows licenses to the cost, Coby determined that it can’t really undercut competitors’ pricing unless it offers Linux. And Coby has determined that Linux isn’t widely enough accepted in the US to make Coby netbooks running Ubuntu very successful, although the company has sold some Linux-based netbooks overseas.

Anyway, long story short, Coby is showcasing a couple of different 9 and 10 inch models with Intel Atom processors and Windows 7 Starter at CES this year. They may or may not be coming to a local retailer near you. Some of the models on display have some pretty nice looking keyboards, cases, and touchpads.

Coby also has a few 12 inch models with AMD Neo and Sempron processors as well as one with a dual core Intel Celeron SU2300 CULV processor. These look pretty slick, but unfortunately they’re just concepts for now. There are no concrete plans to sell these larger mini-laptops at the moment.

You can check out a boatload of pictures I snapped at the Coby booth after the break.