Coby has made a name for itself by offering consumer electronics at dirt cheap prices. What’s interesting is that they’re not all that bad. I was kind of impressed with how much tablet you got for the money with last year’s $200 Coby Kyros MID9742 9.7 inch tablet. And this year Coby has stepped up its game a bit. 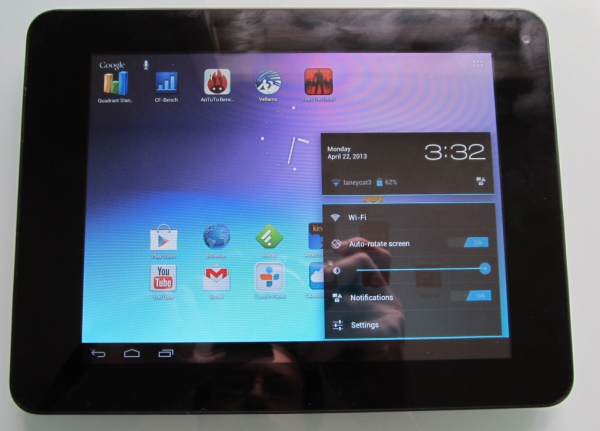 All of the company’s 2013 tablets feature dual-core processors, Android 4.0 software, and they’re the first tablets from Coby to be Google Certified — which means they ship with the Play Store and other apps such as Google Maps and Gmail.

The star of the show is the 10.1 inch Coby MID1065, which is the only model in the lineup to feature an IPS display with wide viewing angles. But that’s not the tablet Coby loaned me to review.

Instead I got a chance to spend some time with the Coby MID8065 8 inch tablet. It offers decent performance, a pretty good price, and an underwhelming display.

There’s a 5MP camera on the read of the tablet and a 0.3MP front-facing camera. It supports 802.11b/g/n WiFi and Bluetooth 2.1 and features stereo speakers and a microSD card slot for extra storage. 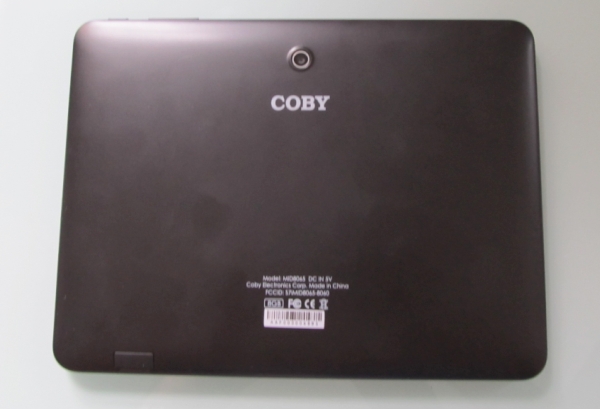 Coby ships the tablet with Android 4.0 Ice Cream Sandwich, and while Google is already up to Android 4.2, the vast majority of apps that can run on Google’s later versions of Android can also run on version 4.0.

Most importantly, Coby no longer ships its tablet with GetJar or other third party app stores. Instead you get access to the full Google Play Store, which makes it easy to download and install hundreds of thousands of apps.

The Coby MID8065 also features a stock Android experience. Coby hasn’t dressed up Google’s software with a skin in any way. The settings, notifications, home screen, launcher, and notifications on this tablet all look pretty much exactly as they would on a Google Nexus device. 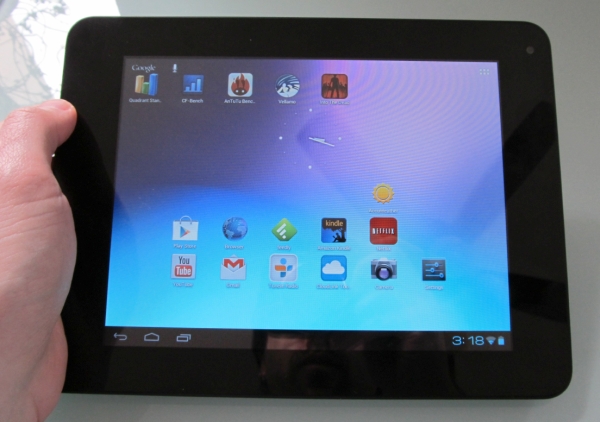 That still makes it smaller and lighter than most tablets with 10 inch screens. But clearly this budget tablet is no iPad mini.

The ports, including a micro USB port, headphone jack, and power jack are on one of the tablet’s short sides. On the opposite end you’ll find stereo speakers which are reasonably clear, but not very loud.

There are power and volume buttons on the side next to the power jack.

On the bottom you’ll find a plastic panel which curves up to meet the edges — so the tablet’s actually a bit thicker than you’d expect if you only measured the flat plastic on the sides.

The microSD card slot is built into that sloped rear panel, and covered by a small plastic door. When it’s open, you can get a better idea of how thick the tablet is.

Don’t get me wrong — at less than half an inch thick and weighing 1.07 pounds, the Coby MID8065 isn’t uncomfortable to hold. It’s just not exactly the most svelte tablet around. But what did you expect from a $150 tablet?

If you said a decent display… that’s where things get a little funky. The display’s about as lousy as the one on the Asus MeMO Pad ME172V, another $150 tablet I reviewed recently. 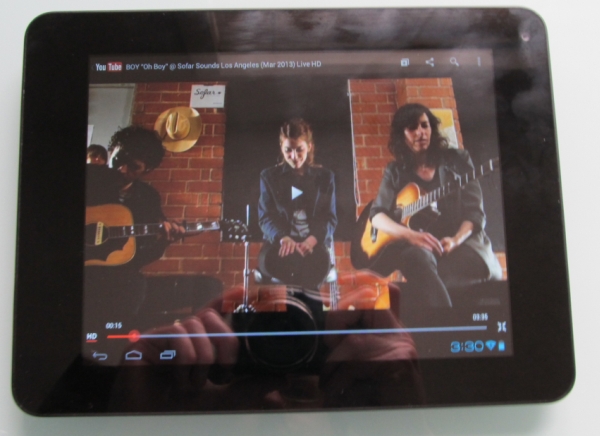 When you hold the tablet directly in front of your eyes the screen looks fine. It won’t win any awards for high pixel density, outdoor visibility, or color reproduction. But it’s not bad.

But when you shift your grip and view the screen from an angle, colors can start to look less vibrant. And if you hold the tablet in landscape mode so that the volume buttons are facing up and tilt the top away from your eyes then images and videos can start to look like photo negatives. 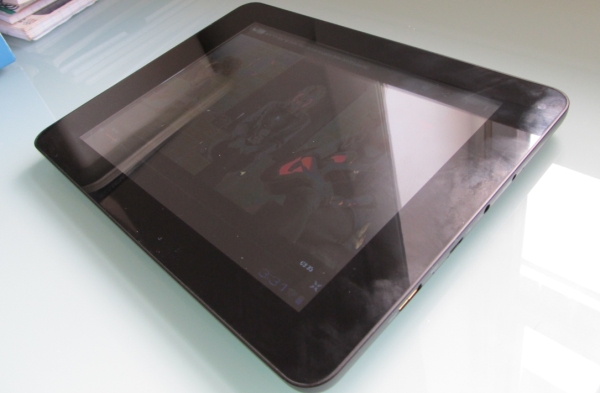 That won’t happen if you hold the tablet with the volume and power buttons facing down — so that’s naturally the position you should hold the tablet in while watching videos. But with the power button on the bottom you run the risk of bumping the Coby MID8065 against your lap or a table and accidentally turning off the screen.

I doubt that’d actually happen very often, but if I were planning to build a tablet with poor viewing angles, I’d at least make sure that it’s easiest to see the screen when holding it in a position where you’re not likely to accidentally bump into a button. 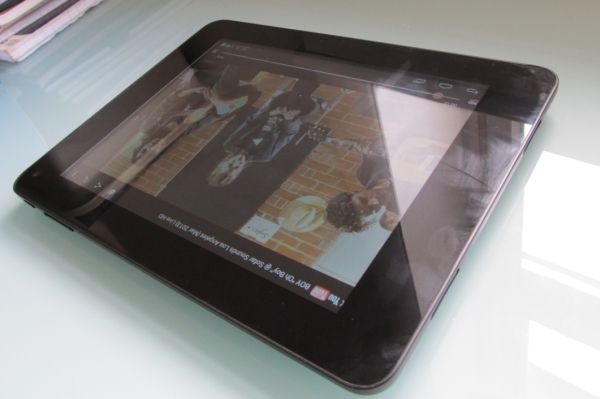 The tablet Coby sent me to review also had another screen problem — specs of dust or dirt under the glass.

It’s not entirely clear whether these were present when the tablet was put together (Coby tells me the device is assembled in a clean room), or if the dust got in there at a later time. 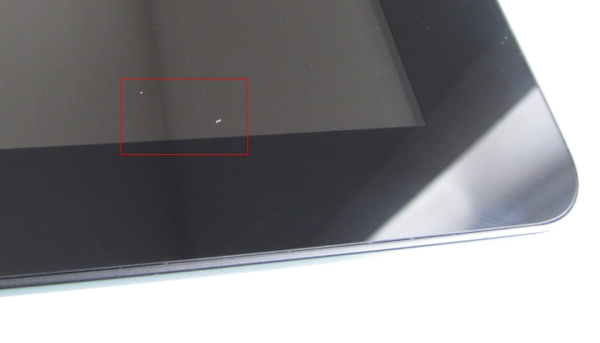 Either way, it makes me worry a bit about the build quality of this tablet. I’m fairly confident that if you buy the Coby MID8065 it won’t have specks of dust in the same spots as on my review unit. But I can’t say it won’t have any at all. 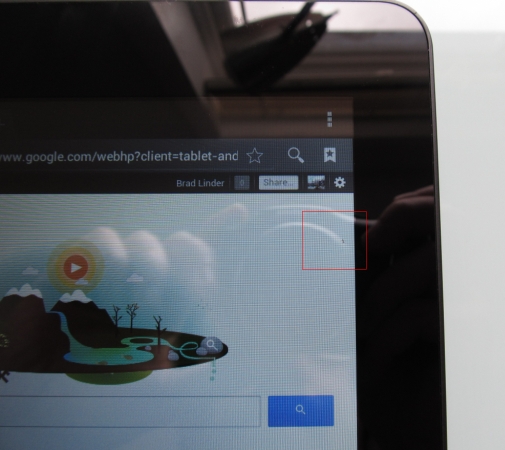 Since the dirt is between the display and the glass there’s no good way to clean it without disassembling the tablet. Of course, then you’d risk letting more dust in… or breaking things even further. 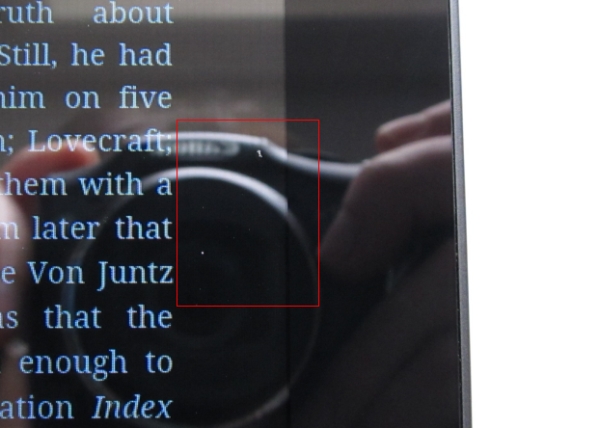 I understand that companies can’t put out $150 tablets with the same features as a $300 tablet. But when you can pick up a Google Nexus 7, Amazon Kindle Fire, Samsung Galaxy Tab 2, or any number of other Android tablets with a IPS displays with wide viewing angles for under $200, it’s tough to understand why Asus and Coby decided to skimp on their displays.

Coby’s latest 10 inch tablet does have an IPS display. But that model also carries a higher price tag. It sells for around $220 and up.

Coby has been offering low-cost Android tablets for a few years, but the company’s 2013 lineup represents a big step up.

Earlier Coby tablets had relatively slow single core processors. And since they weren’t Google Certified devices they didn’t include access to the Google Play Store. 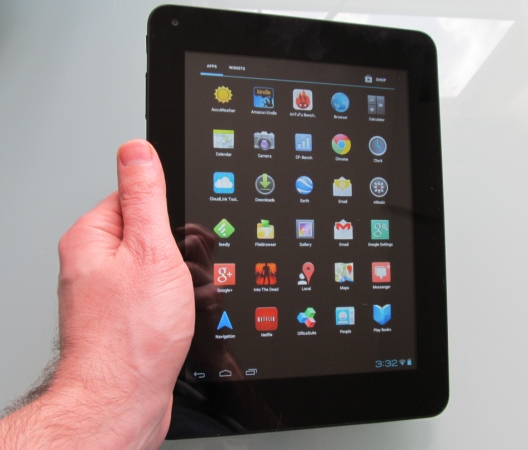 Sure, Android 4.0 is a few years old at this point. But most apps designed to run on newer versions of Android also support the operating system running on the MID8065.

In terms of day-to-day performance, the tablet was able to stream HD video from YouTube and Netflix, I didn’t have any problems opening web pages, using news apps, or playing games. 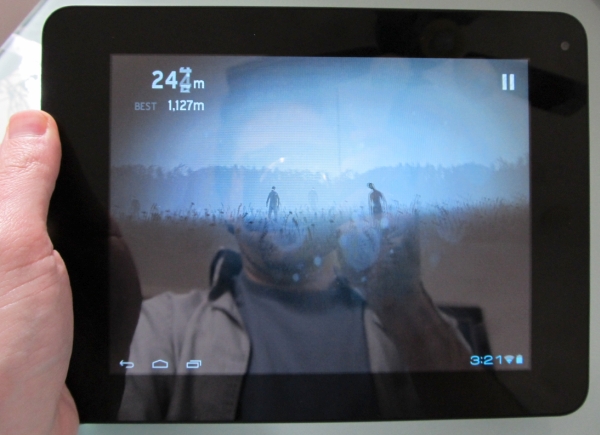 While the Coby MID8065 isn’t quite as snappy as a tablet like the Google Nexus 7 (which has an NVIDIA Tegra 3 quad-core processor), it felt more responsive than the Asus MeMO Pad ME172V (with a WonderMedia WM8950 single core chip).

I ran some benchmarks, which seemed to tell a similar story. 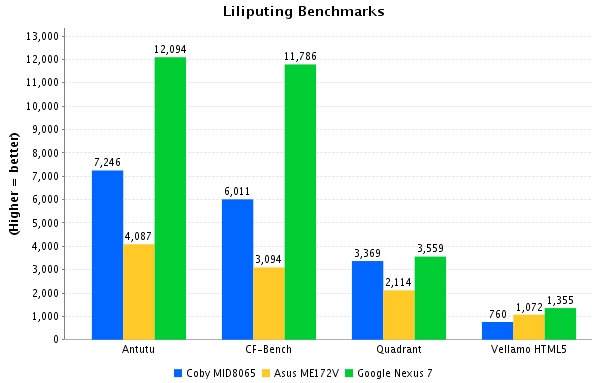 For the most part, the Coby MID8065 may be one of the cheapest tablets available in 2013, but it runs at least as fast as a high-end tablet with a Tegra 2 or TI OMAP 4 processor from a few years ago.

It’s just a shame that it has such as lousy screen.

The Coby MI8065 also gets mediocre battery life. I was able to stream internet radio with the display brightness set to 50 percent for about 5 hours before the tablet shut down on me.

I noticed similar battery drain when I was using it to read eBooks for a few hours at a time. While a 5 hour battery is probably good enough for light usage, I really prefer a tablet that can run for 7 hours or more for reading eBooks. 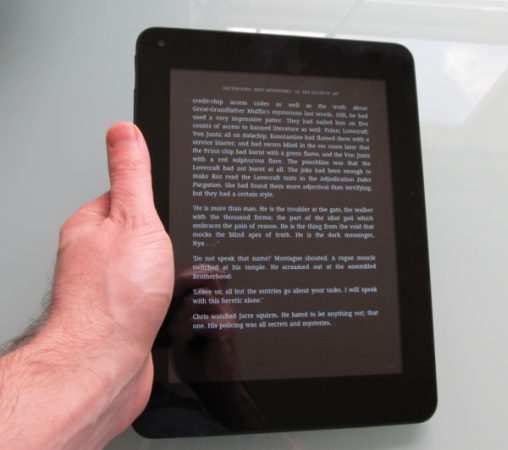 It’s not that I expect to have time for a lot of 7 hour marathon reading sessions. But I’d like to be able to read for a few hours, put down the tablet and pick it up again in a day or two and pick up where I left off without having to worry about charging in between. I’m not sure that the Coby MID8065 is up to that challenge.

The Coby MID8065 offers decent performance, a great price, and a nice alternative to 7 and 10 inch tablets with widescreen displays.

But it’s tough to recommend this particular tablet because of its poor viewing angles and the dust I found under my screen (which could be an isolated incident, but it doesn’t bode well when the unit shipped to a reviewer isn’t in pristine condition).

The good news is that I like where Coby is going with its 2013 tablet lineup. We’re reaching a point where budget Android tablets actually aren’t bad at all. 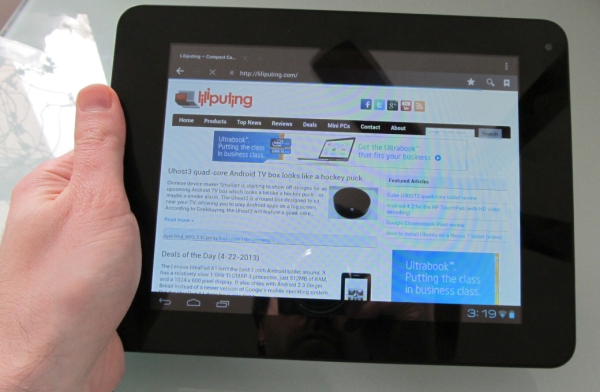 Even some of the cheapest models available have decent processors, versions of Android that are actually designed for tablets (and not just phones), and a few extras like front and rear cameras and HDMI output.