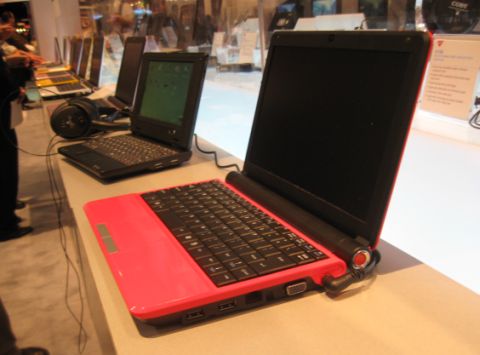 Coby has officially put an end to the whole will they or won’t they enter the mini-laptop market. They will. Big time. As reported earlier today, Coby has a display case filled with netbooks at CES. But what I didn’t realize until I wandered over to the Coby  area was that there are 6 separate Coby netbook models.

Now here’s the thing. This is a brand new product category for Coby and it appears the company still has a lot of kinks to work out. For instance, all of the product sheets, save one, describe netbooks with 1.6GHz Intel Atom processors. But at least two of the units on display actually had VIA C7-M processors. So take everything you read after the break with a grain of salt.

Also, it’s worth noting that the mythical $100 netbook we first heard about isn’t likely to materialize anytime soon. Instead, Coby is going to bring a rebadged version of the generic Xburst netbook with a 400MHz MIPS-based CPU for about $139. Coby also has several machines with 8, 8.9, and 10 inch displays in its lineup. The top of the line 10 inch models are expected to sell for around $299.

The company is seeking buyers willing to place bulk orders to distribute the machines in the US. The plan is to have some netbooks on the market as soon as March, but it might take a bit longer than that to work out distribution deals. It’s possible that you could see some of these netbooks under the Coby name while some might show up with another brand name if that’s what the customer wants. In fact, one of the models I saw today had the word “Brand” written where you’d normally see, well… a brand name.

You can check out a gallery with a ton of pictures of the netbooks after the break, as well as the specs for each model. Keep in mind, all of these things are subject to change.

These netbooks all have similar specs including 10 inch, 1024 x 600 pixel displays, 1.6GHz Intel Atom processors, Windows XP or LInux operating systems, 160GB hard drives, and 1GB of RAM. There are several minor differences in the keyboard, LED, and touchpad layout which you can see in the images in the photo gallery. It’s also worth noting that the NBPC1000 product description says it accepts DDR2/667MHz RAM while the other models take DDR2/533MHz memory.

All three models are described as the same size and weight as the 8.9 inch NBPC892, which doesn’t seem real likely to me.

5 replies on “Coby launches half a dozen netbooks – Photo Gallery”