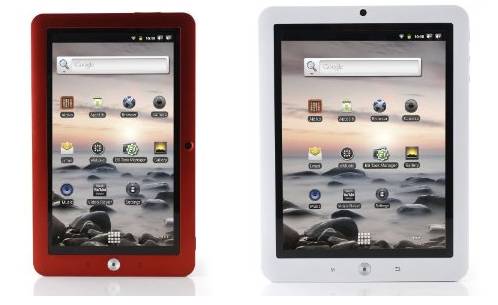 Sure, the $199 Amazon Kindle Fire is nice and all, but the folks at Coby have been putting out cheap tablets for ages (or at least since last year). No, most of the cheapest models don’t have capacitive touch displays, none of them have dual core processors, and they don’t have the build quality or support of Amazon’s tablet… but they’re dirt cheap.

OK, if you’re still reading after that disclaimer, Liliputing reader Nards Barley pointed out a couple of new Coby tablets today. The key difference between the new models and older tablets from Coby? Color.

Most of Coby’s tablets have a sort of dark gray finnish. But Amazon is offering a Coby Kyros MID8125 8 inch tablet with a white case for $157

Unlike the Amazon kindle Fire, both tablets also have microSD card slots, microphones, and front-facing cameras.

The Coby tablets come with the GetJar app store instead of the Android Market… but you should be able to install the Amazon Appstore manually.

One reply on “Coby Kyros tablets add a little color”