Skip to content
The Coby Kyros MID9742 is a tablet with a 9.7 inch, 1024 x 768 pixel display and Android 4.0 operating system. It’s sells for about $240, and this week the tablet passed through the FCC, which is funny because that’s something that normally happens before a tablet goes on sale in the US. 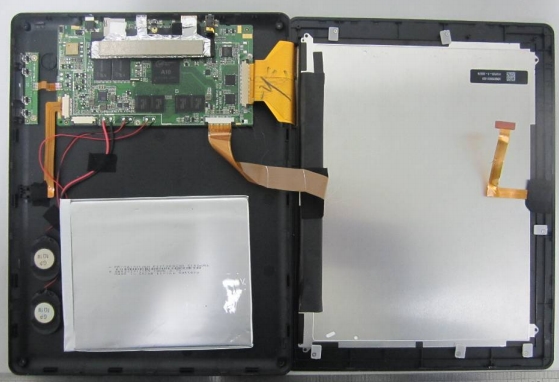 The tablet has a 1 GHz Allwinner A10 processor and 8GB of storage, 802.11b/g/n WiFi, and support for 1080p HD video playback. There’s also an HDMI port for streaming video to an external display.

Thanks to the FCC, we can also see what the tablet looks like under the hood… and it turns out there’s a surprisingly large amount of free space.

Like most Android tablets, the Coby Kyros MID9742 has a battery that’s larger than the system board. But there’s room for a much larger battery.

It looks like Coby took the similar parts used in its smaller tablets such as the 7 inch Coby MID7042 and just crammed them loosely into a larger case.