CloudReady is an operating system designed to basically turn your existing PC into a Chromebook. Launched in 2015, CloudReady makes it easy to replace Windows with an operating system based on Chromium OS (the open source version of Chrome OS). But now you can also create a dual-boot setup on some computers, allowing you to switch between Windows and CloudReady/Chromium when you turn on the PC. 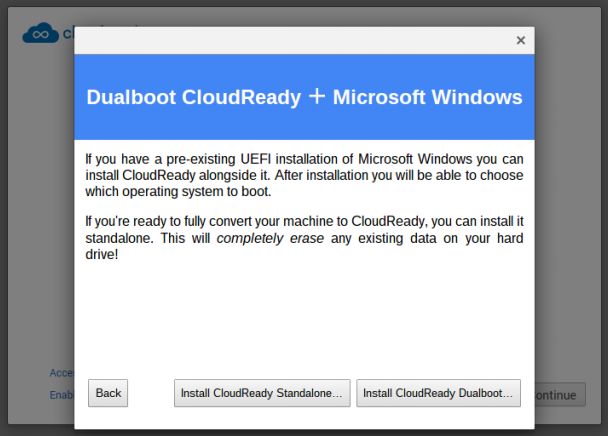 Home users can download and install CloudReady for free, but the developers at NeverWare are also offering paid education and enterprise versions of the software, which will work with Google Management Console service, support automatic updtes, and include technical support services.

For now, the dual boot version of CloudReady requires a relatively recent computer with UEFI firmware, at least 32GB of available storage space, and Windows 7 or later. Legacy BIOS, earlier versions of Windows, and OS X and Linux aren’t officially supported, although it may be possible to get the software to run on computers with those types of firmware and/or operating systems.

Eventually, NeverWare will update its list of certified systems to show which computers are known to support the dual boot feature.

Part of the company’s original pitch for CloudReady was that the light-weight operating system would be able to run efficiently on older computers which might not play well with modern operating systems. Since the dual boot version only really supports modern PCs for now, it seems like NeverWare is now targeting users who just want the versatility of a dual-OS solution, rather than those looking to breathe new life into computers that may have been sitting around gathering dust for the past decade (although you can still install the single-boot version on older machines).