Mini computers with Allwinner A10 ARM Cortex-A8 processors have been around for much of the year. They tend to look like USB sticks with just a few ports for connecting a TV, keyboard or mouse, and not much else.

Since they’re generally designed to let you run Android apps on a TV, that might be all you need. But the new Cloud Client mini PC goes a little further and actually offers some of the features you’d expect from a full-fledged computer. It just comes in a smaller, cheaper package. 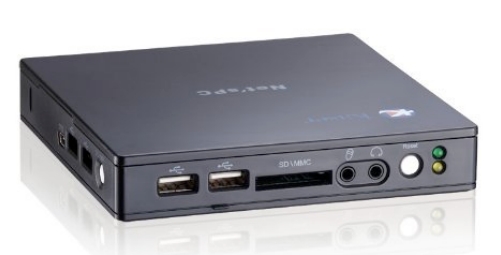 Norhtec plans to sell the Cloud Client for about $90 per unit. Schools and other institutions that plan to order in bulk may be able to get even lower prices.

The Cloud Client is small enough to hold in one hand. But the device features 4 full-sized USB ports, VGA and HDMI ports, an Ethernet jack, and mic and headphone jacks.

There’s a microUSB port that you can use to connect the device to a PC, a separate power jack, and an SD card slot. There’s also even a space for a lock so that you can secure the little computer to a desk.

Under the hood the device has 8GB of storage and WiFi. Right now it runs Google Android 4.0 Ice Cream Sandwich and incldues access to the Google Play Store for third party apps.

But as an Allwinner A10-based device, it’s likely that you’ll be able to run Ubuntu, Fedora, or other Linux-based operating systems on the Cloud Client.

You can see more videos of the Cloud Client in action at the YouTube channel for Michael Barnes.