The Sony Vaio Fit 11a is a notebook with an 11.6 inch, full HD display that bends over backward to become a tablet… when you push the screen back 180 degrees over a hinge so that it faces away from the keyboard and then fold the lid down to hold the device like a tablet.

There are a few things that help set the Fit 11a apart from other convertibles. One is the unusual method for switching from tablet to laptop mode. Another is the relatively low starting price of $799. And a third is the N-Trig active digitizer and support for a pressure-sensitive digital pen.

When I got my first look at the Sony Vaio Flip 11a, the pen was nowhere in sight. But I tracked down the convertible at the Sony booth and got to spend some time with the pen. 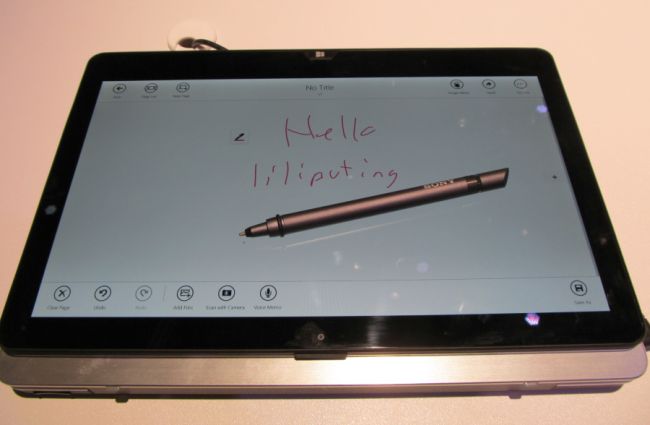 Sony calls the digital pen a Vaio Active Pen. The tablet has an active digitizer which means it supports pressure-sensitive input and you don’t even need to touch the pen to glass to use it. You can hover over the tablet to move an on-screen cursor, for instance. That can help you select items, access drop-down menus, and perform other tasks that are easy to do with a mouse, but difficult with a fingertip.

I’m not much of an artist (and my handwriting is awful), but even I find a digital pen handy when navigating desktop apps on a Windows tablet, because many simply aren’t made for capacitive touchscreens and finger input.

I did take one for the team and try scribbling a few notes with the pen, and as promised it offers pressure sensitive input as long as your using an app that supports that feature. Press down harder on the screen and you get a thicker line, just as if you were using a pen or pencil on paper.

There are a few buttons on the pen which you can press when tapping the screen to emulate a mouse right-click or to use an “eraser” mode on supported apps. It basically lets you scrub items you’ve drawn or written as if you were using a pencil eraser.

The Vaio Fit 11a has a 1920 x 1080 pixel display, up to 8GB of RAM, and up to an Intel Core i7 processor. For a starting price of $799 you can get a model with an Intel Pentium N3520 Bay Trail processor, and that’s the model Sony has been showing off at CES. Even with a Bay Trail chip, the tablet seems pretty responsive.