There are a number of ways to run a desktop Linux environment on a smartphone, but usually it involves installing third-party software. Samsung is one of the first major phone makers that plans to offer official software that lets you use the company’s Android phones as Linux desktop PCs.

It’s called Linux on Galaxy, and Samsung gave us an early look late last year. Now the company is starting to show the software off to developers… and a recent video provides a pretty ismpressive demonstration of what you may be able to do with this platform. 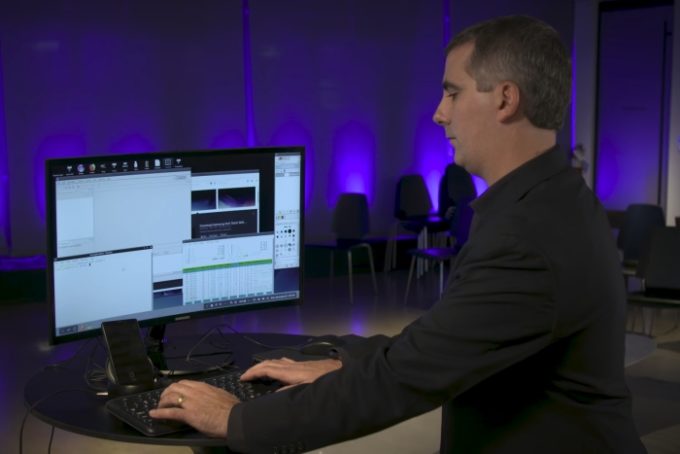 Samsung seems to be targeting developers initially, and one of the highlights of its demo was loading the Eclipse IDE in Ubuntu 16.04. In other words, you could use your phone to write code.

But the demo also shows Firefox, GIMP, a terminal, and other applications.

Linux on Galaxy is designed for use with Samsung’s DeX platform, which lets you connect recent Galaxy S series phones to an external display to get a desktop-style environment with support for multi-window multitasking, among other things. But since the software uses the phone’s Android resources, you don’t need to reboot. Just connect your phone, fire up the Linux on Galaxy environment, and start computing.

Even with a relatively powerful smartphone chip like a Qualcomm Snapdragon 835 or Snapdragon 845, it’s unlikely that you’ll want to do resource-intensive tasks on a phone when you could do the same things much more quickly on a computer with a powerful Intel or AMD processor. But for light-weight activities, a phone that you can carry from workstation to workstation could be all you need.

And as phone processors continue to be more powerful, it’s not hard to imagine your phone being the only PC some people ever really need.

Or maybe Linux on Galaxy will prove just as unpopular as Motorola’s long-discontinued platform that allowed you to connect an Android phone to a laptop dock to use the desktop version of Firefox. It seemed like a nifty idea at the time, but it might have been solving a problem nobody really had… because if you’re going to carry around a laptop dock, why not just carry a laptop?

Likewise, if you’re going to plug your phone into an external display, why not just leave a PC plugged into it instead?

There’s definitely some serious wow factor at play here. I’m just curious to see whether Linux on Galaxy moves from neat party trick to something people actually find themselves using on a regular basis.