The Endless Mission One and Mission Mini desktop computers will be available for pre-order in the US starting January 16th.

They’re both small, fanless desktop computers that ship with Endless OS, a Linux-based operating system that’s designed to be easy to use, and which comes with tools to help kids (or adults) learn to write code.

I got a chance to catch up with Endless CEO Matt Dalio on the even of the Consumer Electronics Show, and he explained some of the thinking behind these tiny PCs and the software they run. 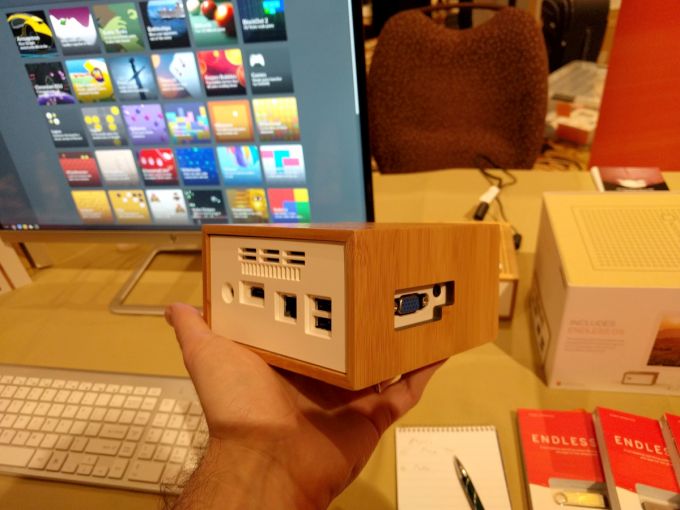 The smaller Mission Mini has a bamboo lid, while the larger Mission One has a plastic case that’s surrounded by bamboo. But you can slide out the internal portion, remove a few screws, and get inside the case to upgrade or replace memory or storage.

Dalio says Endless is first and foremost a software company. But in order to get its educational software into the hands of kids in developing markets, the company has been producing low-cost computers that are sold abroad.

But some folks in the US asked for the ability to run Endless OS, so the company decided to make the software available for download and installation… and to launch a few new PCs aimed at the domestic market.

Among other things, Endless OS includes a tool that lets you inspect the code of any program running on a computer, which could help you understand how a computer does the thing it does… or how to make changes so it does what you want it to do.

Endless OS also has a home screen filled with icons and a search bar, which should be a familiar design for anyone familiar with mobile operating systems. There’s also an app store, with access to a wide range of Linux-based apps including games, educational software, productivity tools, and media players.

I asked Dalio if somebody could buy a Mission computer and replace the operating system with Ubuntu or something else. He said there’s nothing stopping you from doing that, because the device is totally open. You’ll probably have better luck doing that with the Mission One than the Mission Mini, though, since most GNU/Linux-based operating systems aren’t optimized for Amlogic chips (unless you count Android as a Linux-based OS).