The Kangaroo Notebook is one of the most unusual computers I’ve seen in a while. At first glance, it looks like a cheap Windows notebook… and that’s kind of what it is. The $300 laptop features an 11.6 inch, 1366 x 768 pixel display with limited viewing angles, a USB 3.0 port and a USB 3.0 port, and a design that looks pretty generic… until you peek at the front left side of the computer. 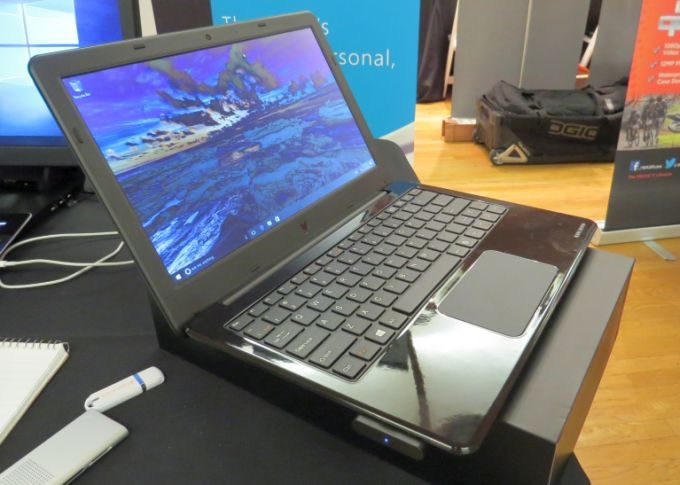 Because that’s where you’ll find a tiny module that actually houses all of the computer’s real hardware. While the battery, display, and keyboard are in the laptop section, the processor, storage, RAM, and operating system are all in a tiny module called the Kangaroo Mini.

You can remove the Kangaroo Mini and replace it with another module to change your computing experience.

First announced this morning, I got a chance to play with a Kangaroo Mini this evening and talk to the folks at InFocus about the motivation for this modular notebook computer system. 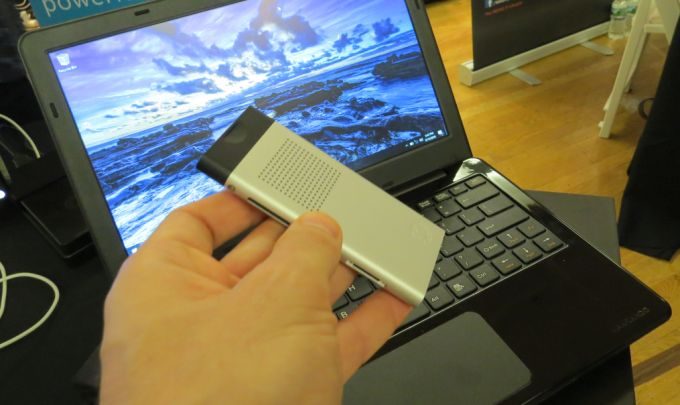 So here’s the idea: pay $300 and you get two Kangaroo Mini computer-on-a-module systems and one notebook shell. It’s kind of like getting two complete Windows 10 computers for the price of one… except that you can only really use one at a time.

Say you’re a parent and you want to share a computer with your kids. You can each have your own operating system and storage. The system could also work for business or education clients looking to share components rather than pay full price for more laptops than they need.

That said, we now live in a world where you can find Windows 10 laptops with similar specs for under $200, so while the idea of a modular laptop system might be appealing, it remains to be seen whether the $300 price tag will be.

Each Kangaroo Mini features an Intel Atom x5 Cherry Trail processor, 2GB of RAM, and 32GB of storage, plus a microSD card slot.

There are no USB or HDMI ports on the mini itself, and there are no fans inside the case. Slide the module into the laptop and it will act as the brains of the computer, while the laptop provides the display, keyboard, touchpad, and battery. The laptop shell also has a bunch of vents and a fan to help keep the system from overheating. 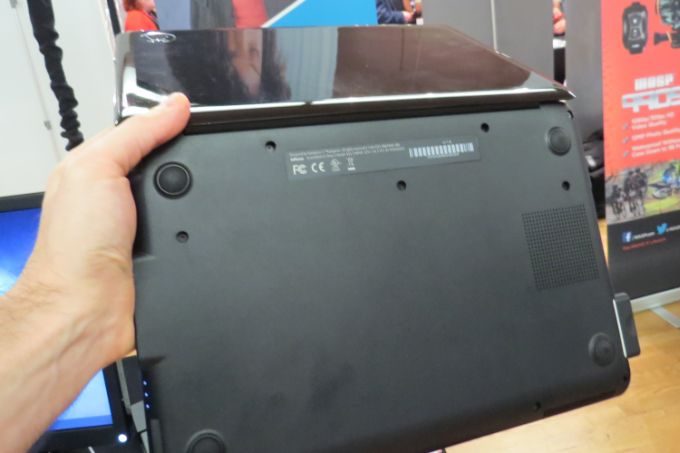 This isn’t the first time InFocus has launched a  tiny, somewhat modular PC. The company’s Kangaroo Mobile Desktop has similar specs, but it also has a fingerprint scanner, a battery, and connectors that allow you to attach it to a docking station for use as a full-fledged desktop PC.

InFocus says the Kangaroo Mini is basically what you’d get if you made the Mobile Desktop, but left out the battery. When I asked if the company had considered adding USB and HDMI ports to the Mini, the answer is that not only would they add bulk, but they’d also potentially eat into sales of the desktop product.

The Mini is tiny. The module weighs less than 2 ounces and it’s small enough to hold in one hand or slide into your pocket. It’s a shame that it only works with a rather lackluster laptop dock right now. 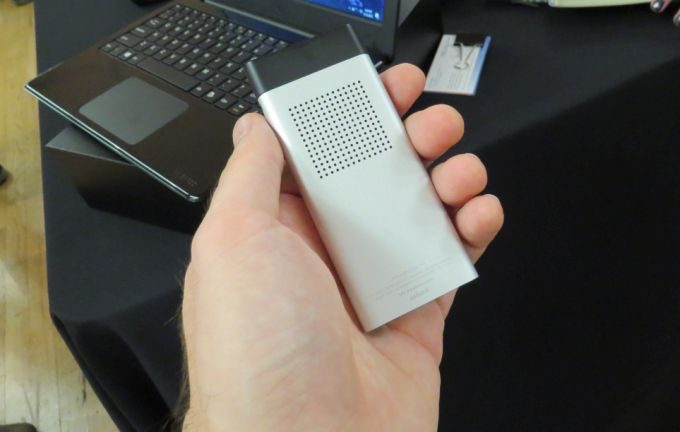 But if the concept proves popular enough, InFocus is open to the idea of producing models with higher-quality displays, bigger batteries, or other enhancements. The goal for the first version was to keep things affordable and accessible… and to see if there’s a market for this type of device.

The Kangaroo Notebook is clearly a first-generation product. If it does well in the marketplace, there could be whole ecosystem built around this device. But the company isn’t making any promises yet… if you’re interested in buying one today, you should do it because of what the current model offers, not because of the promise it holds fore the future.

And what it currently offers is the ability to use a single notebook shell with multiple PC modules… whether that’s something people actually want to do remains to be seen.

As for the Kangaroo Mobile Desktop, that’s still supported as well. The company is no longer selling an entry-level model for $99, but you can buy a Plus version with 4GB of RAM and 64GB of storage for $170, and soon the company plans to offer a Pro Dock for existing customers (without requiring them to buy a whole new Kangaroo PC).