Fuhu makes tablets for children and typically markets them under the “nabi” brand. But the company’s two newest tablets are called DreamTabs. That’s because they’ve been developed in partnership with animation studio DreamWorks and designed to feature digital content from DreamWorks as well as a new version of Fuhu’s kid-friendly software that’s based on Android 4.4 KitKat.

The company plans to roll out two versions of the Fuhu DreamTab this spring, one with a 12 inch display and another with an 8 inch screen. 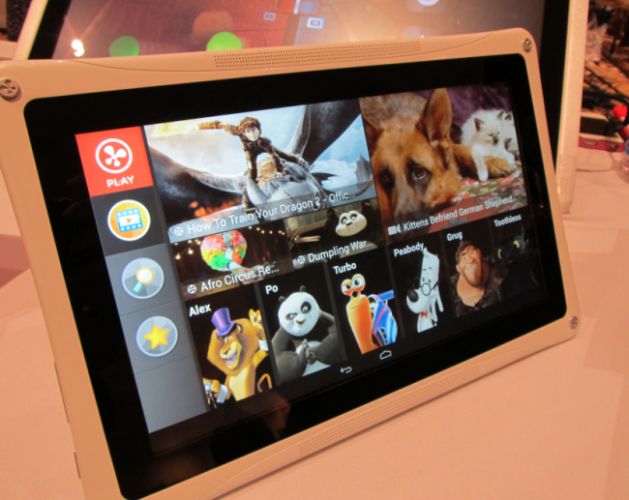 The tablets are powered by Intel Atom Z3740 Bay Trail processors, making them some of the few Android-powered tablets to feature Bay Trail-M chips.

Pricing hasn’t been finalized yet, but the 8 inch model is expected to sell for under $300. The larger DreamTab will probably command a higher price.

There’s a heavy focus on kid-friendly entertainment apps, educational software, and even a “chores” app that lets kids earn points to spend on digital content or real-world items when they reach certain goals. But these devices have the guts of reasonably powerful Android tablets and if you switch to a password-protected parents mode, you can use them as ordinary Android tablets, complete with access to the Google Play Store.

In person, the two tablets seemed well-built and the software pretty straightforward and easy to use. There’s also a sort of peg board on the back of each tablet which you can use to attach an optional kickstand… or which children can adorn with decorative items to customize the look of the tablets.