BlackBerry’s first Android smartphone is now available, and not surprisingly, the $699 BlackBerry Priv feels a bit like a mix between a classic BlackBerry phone and a modern Android device.

It has a large touchscreen display, support for over a million Android apps, and decent camera. But it also has a physical keyboard that hides behind the screen when it’s not in use and some BlackBerry software for communications and security.

I recently got a chance to spend a few minutes with the Priv, and here are a few thoughts. 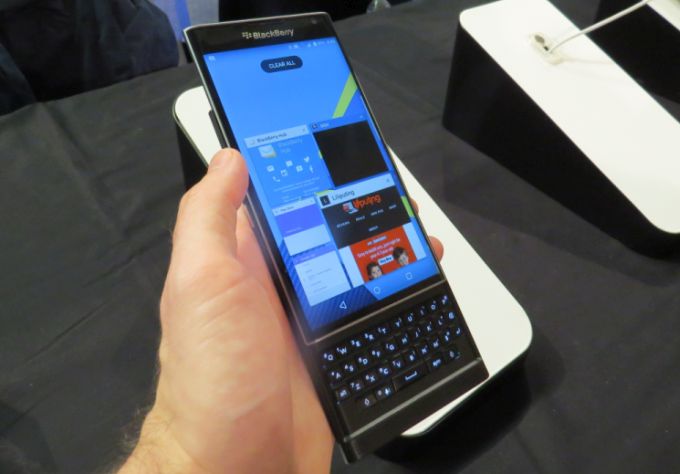 I’ve never spent much time with phones that have physical keyboards, so I’m not nostalgic for a time when most smartphones had them. So when I first started typing on the Priv’s physical keyboard, I made a lot of mistakes: the keys are small and packed tightly together. But I’m told it’s something you can get used to, and once you do, you might find yourself able to type without looking at your fingers, since you’ve got tactile feedback, much the way you do with a laptop or desktop keyboard.

You can also use the on-screen software keyboard, but then you’re kind of ignoring one of the key selling points of the phone. Still, it might be simpler for entering a quick word, email address, or URL.

One nifty thing about the keyboard is you can also use it s a touchpad: swipe your finger across the top of the keyboard and you can scroll through home screens, web pages, documents, or other apps.

The mechanism for sliding out the keyboard is pretty nice. Actually it feels more like you’re sliding the screen up, while the keyboard stays in place. Just give the screen a little push while holding onto the back and the screen will slide smoothly, finishing the motion without any help from you.

While I didn’t spend a lot of time with the phone and some features (such as BlackBerry Hub) weren’t set up on the demo unit I tried, I did notice that some simple actions like scrolling and zooming in the Google Chrome web browser felt smoother on the Priv than on the Google Nexus 5X… even though both phones have the same Qualcomm Snapdragon 808 processor.

Maybe that’s because the Priv has 3GB of RAM while the Nexus 5X has just 2GB. Or maybe it was just a fluke and if I’d tried on a different day performance would have been different. It’s hard to draw that kind of conclusion from such a short hands-on.

Overall though, the device has a pretty nice looking 5.4 inch display with curved edges (although the curves don’t really feel all that necessary), a reasonably large 3410 mAh battery, and software that looks a lot like stock Android until you notice that the same gesture that lets you bring up Google Now also offers  shortcut to BlackBerry Hub, which is a unified communications utility that shows all your messages in one place. 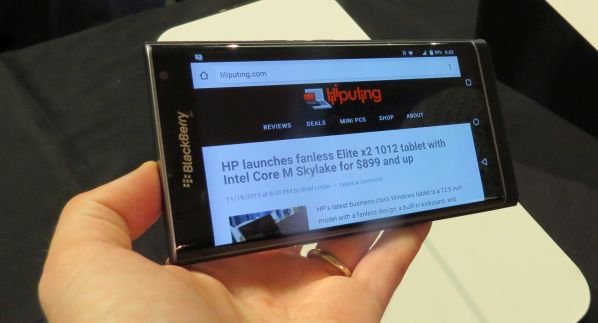 You also get access to BlackBerry Messenger, BlackBerry’s DTEK security software, and some other features you won’t find on most Android phones.

BlackBerry is currently shipping the phone with Android 5.1, but plans to offer an Android 6.0 update soon, and the company says that now that Google is releasing monthly security updates for Android, BlackBerry will push those updates to users on a monthly basis.

But the main reason to consider this phone is probably the keyboard. It’s what really does the most to set this phone apart from the competition… although it’s up to each user to decide whether that justifies the phone’s $699 price tag when a $429 Google Nexus 5X has the same processor, same amount of built-in storage, stock Android software, and a a high quality camera, and fingerprint scanner (but less RAM and no microSD card slot).

The Priv feels like a phone that will allow existing BlackBerry fans to buy a new BlackBerry phone that doesn’t suffer from a lack of third-party apps. I’m less convinced that it’s a phone that will convince existing Android users to switch to BlackBerry… it just seems too expensive to do that. But this is just BlackBerry’s first Android phone. Future models could have more attractive price tags, and if the Priv is a head-turner, maybe those models will be wallet openers.

20 replies on “Closer look at the BlackBerry Priv (video)”