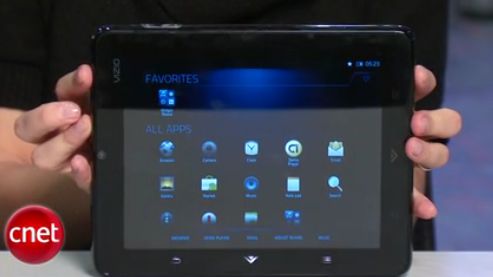 Vizio has started to show off a prototype of the company’s upcoming Android tablet. There’s not a lot of new information to share. As we already knew, the tablet has an 8 inch, 1024 x 768 pixel capacitive touchscreen display, a 1GHz CPU, 802.11b/g/n WiFI, Bluetooth and GPS, as well as HDMI output, a front-facing camera and microSD card for extra storage.

The two most distinctive features are multimedia-centric, which makes sense since Vizio is best known as a TV maker. The tablet has an IR blaster and an app that lets you use the device as a universal remote control for your TV or other home theater equipment. It also has 3 speakers, arranged so that you can get stereo sound whether you’re holding the tablet in portrait or landscape mode.

Engadget, CNET, and Laptop Magazine have all published video previews of the tablet — and it looks like none of those sites could get Vizio to fess up to which version of Android the tablet is running, exactly what processor it’s using, or how much it will cost.

You can check out two of the videos after the break. You’ll have to hit up Engadget for the last one.