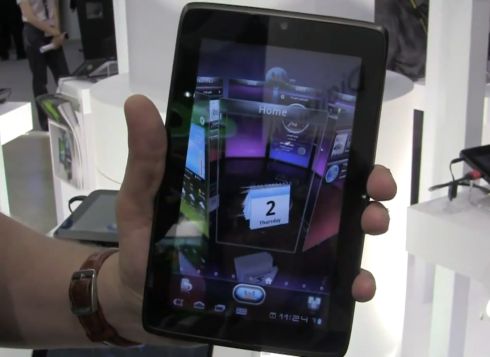 ViewSonic unveiled one of the first 7 inch tablets to run Google Android 3.0 Honeycomb at Computex this week. ON paper, the tablet looks nearly identical to most of the other Honeycomb tablets making the rounds these days. It has a 1 GHz NVIDIA Tegra 2 dual core processor, USB, SD, and HDMI ports and front and rear cameras. But there are two key differences between the Viewpad 7x and other Honeycomb tablets:

That should be enough to put to rest any rumors that Google Android 3.x Honeycomb won’t run on devices with screen resolutions lower than 1280 x 800 pixels.

Netbook News got a chance to check out the ViewSonic tablet in Taiwan this week and they’ve posted a video of the 0.84 pound tablet in action. You can check it out after the break. It looks like ViewSonic has preloaded the tablet with the SPB Shell program launcher and home screen replacement.

Netbook News also got word on the pricing for the tablet. It will reportedly run about $449 for a WiFi-only version. ViewSonic may also offer 3G and/or 4G capable models.