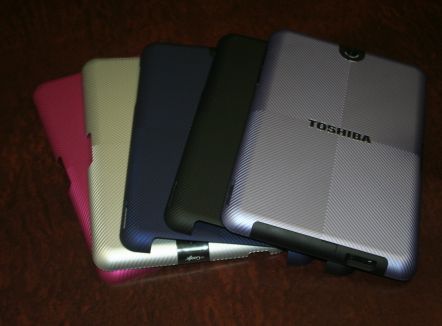 The Toshiba Thrive tablet goes up for pre-order on June 13th and ships on July 10th. It’s a 10 inch tablet with Google’s Android Honeycomb operating system. But that only tells part of the story.

I got a chance to check out an early version of the tablet at CES in January and found out that it would be one of the few Android tablets to have a removable battery, for instance. Now the folks at CNET have posted some hands-on photos and more details about how Toshiba hopes to make the Thrive stand out from an increasingly crowded field of 10 inch Honeycomb tablets.

First up, Toshiba will include a file browser that can read documents from USB drives for SD cards, making it easy to access photos, music, or movies stored on an external device.

Toshiba will also bundle LogMeIn software with the Thrive tablet, letting users remotely login to a Windows or Mac computer and control it from the tablet. Not only does that let you access your files on the go, but it also technically lets you do strange things like edit Excel spreadsheets or surf the web using Internet Explorer from an Android tablet — by remotely controlling Office or IE on your desktop or laptop computer.

You also get PrintShare software allowing you to send print jobs to an internet connected computer.

Finally, a series of colorful back plates will be available for the tablet, allowing you to slap a black, silver, blue, green, orange, purple, or pink cover on top of the removable battery.

6 replies on “Closer look at the Toshiba Thrive tablet”