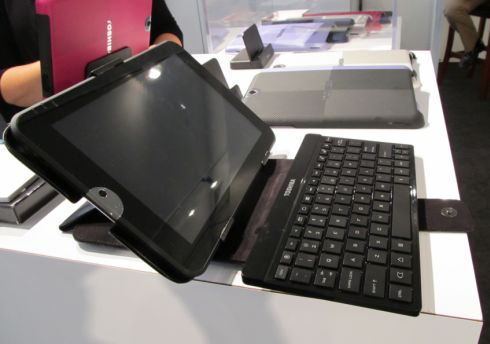 It’s hard to develop an Android tablet that stands out from the crowd. Somehow Toshiba managed to do it though, by combining some of the best elements of modern consumer tablet with features we’ve come to expect from laptop and classic tablet PCs. The 10.1 inch Toshiba Thrive tablet has all the usual Android staples including a 10.1 inch, 1280 x 800 pixel display and 1 GHz NVIDIA Tegra 2 processor. But it also has a full sized USB port, full sized HDMI port, and full sized SD card slot.

The Toshiba Thrive also has a removable back panel which covers a user replaceable battery — something no other Honeycomb tablet currently offers.

Toshiba plans to ship the Thrive tablet starting July 10th, but I got a chance to spend some time with one today.

You would think that the full sized ports would give the tablet a bulky look or feel, but they really don’t. The tablet weighs 1.6 pounds, which makes it heavier than a Samsung Galaxy Tab 10.1, but about the same weight as a Motorola XOOM. But the weight is well distributed and the textured back panel makes the tablet easier to grip than the XOOM so that it’s fairly comfortable to hold from any side.

While there’s a proprietary docking port on the bottom of the tablet, there’s also a standard mini-USB port that you can use to connect the tablet to a computer. In fact, the Thrive will ship with a mini USB cable, not a dock, so this is likely the port you’ll use most often. The adherence to standard port sizes means it will be much easier to get spare cables and other accessories for the tablet.

That comes in handy if you want to use an SD card for storage. The base model of the Thrive tablet will cost $429.99 and come with just 8GB of storage. You can get a 16GB model for $479.99 or a 32GB model for $579.99. But if you’re primarily interested in the extra storage space for pictures, music, movies, or other media, you can save a lot of money by getting the cheapest model and investing in a high capacity SDXC card.

While tablets with proprietary ports will require some sort of USB adapter to take advantage of Android 3.1’s capability to use USB peripherals such as a keyboard, mouse, or joystick, the Thrive will support these accessories without any extra hardware.

The Toshiba Thrive isn’t the most attractive tablet I’ve seen. The plastic door covering the USB, HDMI, and mini USB ports looks kind of unwieldy, for instance. But the extended software and hardware features make the Thrive one of the more intriguing Android tablets I’ve seen and I’m looking forward to testing a review unit in the coming weeks to see if it lives up to its potential.

One reply on “Closer look at the Toshiba Thrive Android tablet”