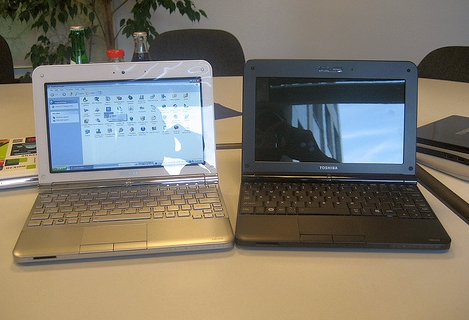 It looks like the NB200-11H will be the top of the line item, with a metallic (possibly aluminum) chassis and a chiclet-style keyboard that’s reminiscent of the keyboards found on newer Asus Eee PC netbooks. The NB200-11L, by contrast has a black plastic case and flatter keys that are placed closer together. Sascha says it more closely resembles the keyboards found on the Dell Inspiron Mini 10 and HP Mini 1000.

It’s likely that the NB200-11L will sell for a little less than the NB200-11H, although final pricing hasn’t been revealed yet.

Sascha was also impressed with the responsive touchpad and its two distinct buttons. And in case you couldn’t tell from the photo, both netbooks feature glossy displays.