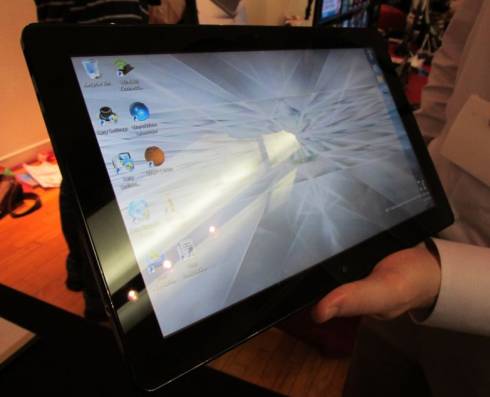 The Samsung Series 7 Slate PC is a tablet computer with an 11.6 inch, 1366 x 768 pixel display and support for both finger input and pressure-sensitive input using a digital pen. That’s because it has both a capacitive, multitouch display and a Wacom active digitizer.

The tablet also has a relatively powerful Intel Core i5-2467M processor, 4GB of DDR3 memory, and a choice of a 64GB or 128GB solid state disk. It comes standard with Windows 7 Home Premium, although Windows 7 Professional will also be available.

All in all, the Series 7 Slate is one of the most responsive Windows slate computers I’ve used (although to be fair, most of my experience with slates has been limited to 10 inch tablets with Intel Atom processors). The Series 7 blends some of the best elements of classic Windows tablets, such as handwriting input, and modern consumer tablets such as finger-friendly gesture support.

I got a chance to check out the Series 7 last night, and I was pleasantly surprised at how well I was able to navigate the Windows 7 user interface on the 2 pound tablet using my fingers. While Windows 7 does include some touchscreen support, it generally isn’t as finger-friendly as iOS, Android, or the upcoming Windows 8 operating system.

But Samsung has applied some tweaks so that when you tap on an icon, the mouse cursor is likely to actually register in the right place (some other tablets I’ve used seem to expect pen input and when you use a finger instead, the device often has a hard time figuring out exactly what you’re tapping on).

Unlike convertible tablets though, the Series 7 doesn’t have a built-in physical keyboard for when you want to type. But Samsung will offer a Bluetooth keyboard accessory which works quite nicely. 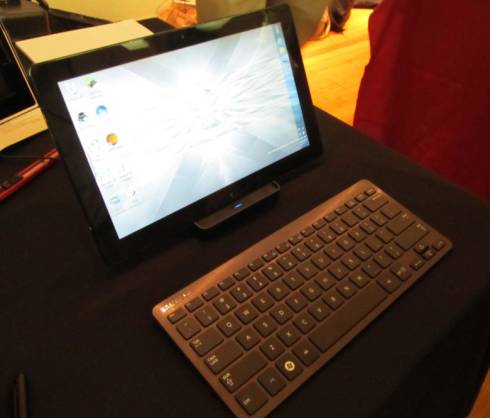 The keyboard features an island-style layout, with flat keys and a little space between each. The keyboard itself is about the same width as the computer, and it’s very thin and light. Samsung designed the accessory so that you can easily slip it into the same carrying case as the slate.

There’s also an optional dock accessory which props up the tablet and gives you a few extra ports including an HDMI output and USB port. The tablet actually has HDMI and USB ports of its own, so the dock isn’t an absolute necessity, but you can use it to charge the tablet, connect peripherals, and prop up the tablet for typing, watching videos, or just looking nice. 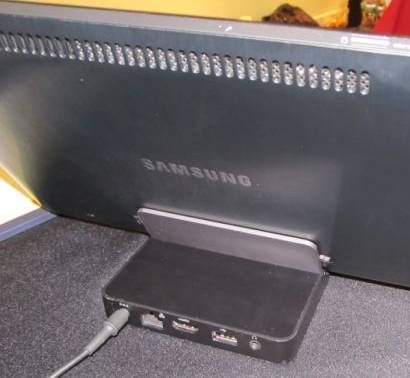 Samsung will ship the Series 7 Slate PC starting October 2nd for a starting price of $1099. You can also get a bundle which includes the keyboard and dock for $1349.