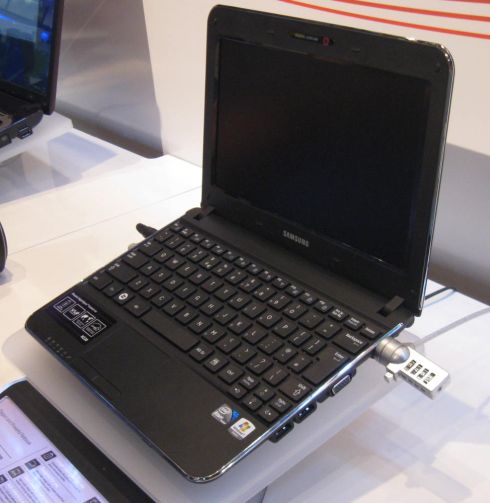 All of Samsung’s new laptops feature Intel Atom N450 Pine Trail processors, multit-touch touchpads, matte screens, and a new island-style keyboard design. And the Samsung N210 and N220 are no different. What sets these netbooks apart from Samsung’s other offerings is a 6 cell, 5600mAh battery which Samsung says can power the laptops for up to 12 hours.

The N210 and N220 also have a 3D textured pattern on the lid and ship with the Phoenix HyperSpace quick boot environment.

All of the press materials I’ve seen for the N210 and N220 so far pretty much group the two netbooks together as if they were identical. And in most respects they are. But the Samsung N220 is destined for Europe, while the N210 will be available in the US as early as this week.

The primary physical difference between the two laptops is the keyboard. The Samsung N220 has an extra large enter key that takes up more space than the enter key on the N210, while the N210 has a wider shift button on the right side of the keyboard. There are a few other minor differences in the keyboard, but as far as I can tell, the hardware specs for both models are pretty much identical.