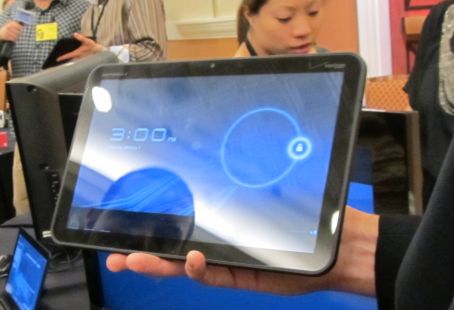 Motorola has started showing off its upcoming Xoom tablet which will be available from Verizon during the first quarter of 2011. The software is still a bit rough around the edges, so a friendly Motorola rep spent more time showing me demo videos than the actual user interface for the tablet, but that’s to be expected since Android 3.0 Honeycomb isn’t fully baked yet.

The tablet has a 10 inch, 1280 x 800 pixel HD display, 1GB of RAM, and a 1GHz NVIDIA Tegra 2 dual core CPU. At launch, it will have integrated 3G and WiFi capabilities, but during Q2, 2011 you’ll be able to upgrade to 4G. And I don’t mean by buying a new unit. Motorola says you’ll be able to send in your 3G device for an upgrade once the 4G components and network are ready.

While the dual core processor packs some serious punch and can play 1080p HD video and record 720p HD video, Motorola says you should still get 10 hours of battery life out of the Xoom tablet while watching movies. Surfing the web or performing other tasks that don’t tax the processor as much as watching HD video should lead to even better battery life.

You can check out a demo video after the break, which also provides a good look at some of the new features in Honeycomb, including a web browser that looks a lot like the desktop version of Google’s Chrome browser.

4 replies on “Closer look at the Motorola Xoom tablet with Android 3.0 Honeycomb”