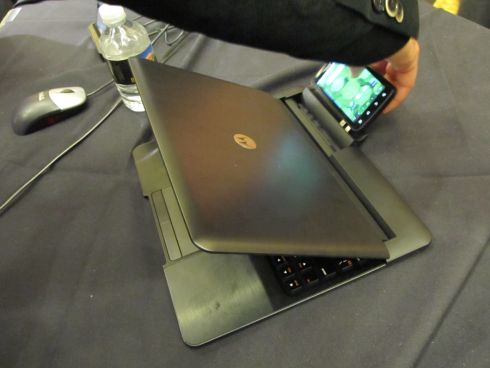 The Motorola Atrix 4G Webtop is an intriguing system that lets you use an Android smartphone as the brains of a thin and light laptop. The Atrix 4G is a smartphone with an NVIDIA Tegra 2 dual core processor, while the Webtop is essentially a docking station in the form of an ultralight 11.6 inch laptop.

Alone, the Webtop is pretty much useless. But if you drop the Atrix 4G phone into a dock in the back, the notebook springs to life, letting you access apps on your phone on a larger screen, or even make phone calls. There are also custom apps that can only be run on the Webtop such as a version of the Firefox web browser that’s been optimized for ARM-based chips.

The Webtop is actually running its own Linux-based operating system which interacts with Android, rather than simply mirroring the Android UI on the big screen. This allowed Motorola to design a user interface that makes more sense on a laptop-style device, complete with a dock-style application launcher on the bottom of the display.

The only thing that really worries me about the concept is the placement of the dock. While the phone seems to lock into place pretty firmly, I’d be scared to move if I had this contraption on my lap, for fear that the phone would fall off and hit the floor.

Update: While the Motorola rep I spoke with cautioned against turning the unit upside-down, lest the phone should fall out, the folks at Engadget found a braver rep who was willing to demonstrate just how strong the locking mechanism is by flipping the webtop over. The phone stayed in place. So that’s good news.

9 replies on “Closer look at the Motorola Atrix 4G Webtop”