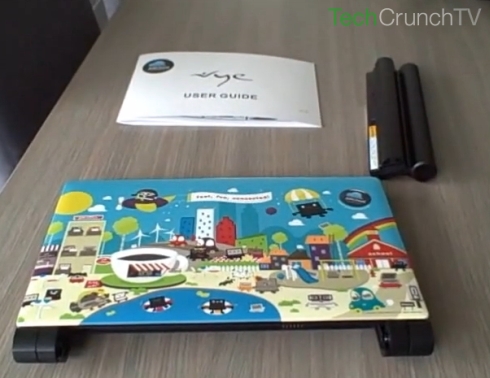 The Jolibook is the first netbook to ship with the Jolicloud operating system preloaded. The netbook is expected to go on sale in the UK soon, and it features a 1.5GHz Intel Atom N550 dual core processor, 1GB of RAM, a 250GB hard drive, and a 10.1 inch display. It has 3 USB 2.0 ports, mic and headphone jacks, a VGA port, 3-in-1 card reader, and Ethernet port.

What’s more interesting is the operating system, which is Jolicloud 1.1. The OS is based on Ubuntu Linux and it can run most desktop apps designed for Ubuntu, but the OS also blurs the lines between desktop and web apps by letting you “install” web apps to your desktop. You can also login with your Facebook credentials to connect to any of your friends who are already Jolicloud users.

This lets you see apps that your friends have already installed or recommended, but there’s also a wider app store which lets you install shortcuts to web apps like Facebook, Twitter, or Google Docs, as well as native apps such as VLC or GIMP.

Robin Wauters from TechCrunch has received one of the first review units and he’s posted some photos and a short video overview. I personally couldn’t get the video to play for more than a few seconds on my computer (although the audio plays all the way through, the image gets stuck), but your results may vary. Just for kicks, I’ve embedded the video after the break.

Update: A better version of the video is now posted below.