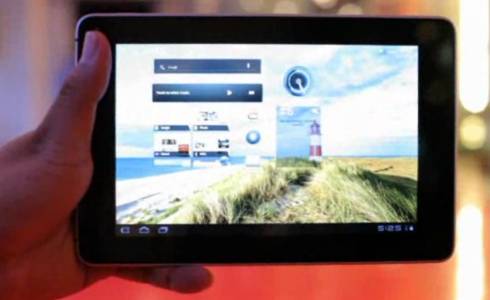 Huawei unveiled a new 7 inch Android tablet called the MediaPad last night. It looks like a solid little tablet with a metal case (and a few plastic elements at the top and bottom). Huawei says the tablet will ship with Google Android 3.2, which is basically a version of Android 3.1 Honeycomb optimized for 7 inch tablets instead of 10. But CNET got a chance to check out an early version of the MediaPad and found that the demo models are all still running Android 3.1.

The good news is that the operating system looks pretty good on the tablet anyway — although it might look a little better with slightly larger toolbars and widgets.

I still haven’t seen anyone report on the actual screen resolution for the tablet, but graphics look pretty sharp. I’d be surprised if the MediaPad had anything less than a 1024 x 600 pixel display.

CNET reports that Huawei will partner with wireless carriers to sell the MediaPad, but that it will also be available through retail chains.