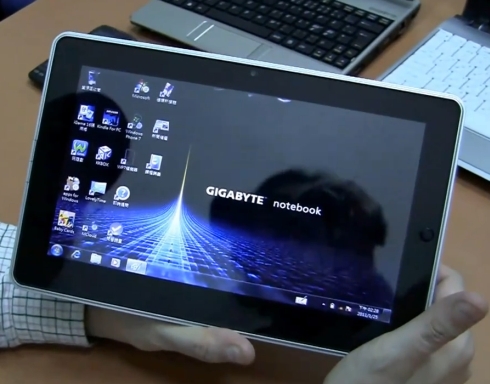 Gigabyte unveiled a new 10 inch Windows slate computer during CES earlier this month. But I didn’t get a chance to catch up with the folks at Gigabyte at the show. Fortunately Sascha from Netbook News managed to stop by the Gigabyte offices in Taipei recently, and he’s posted a hands-on video of the new Gigabyte S1080 tablet.

There are also some buttons to make navigating Windows easier, including left and right mouse buttons. The computer has a capacitive multitouch display and comes with Gigabyte’s AppPark software which is a small suite of touch-friendly apps.

Gigabyte has been producing convertible tablet-style netbooks for a few years, so the company is no stranger to Windows computers with touchscreens. But this is the first Atom-powered computer from Gigabyte I’ve seen without a physical keyboard.

The tablet should begin shipping in March. There’s no word on pricing yet, but Gigabyte’s computers don’t tend to come cheap.

You can check out Sascha’s video after the break.

3 replies on “Closer look at the Gigabyte S1080 Windows slate”