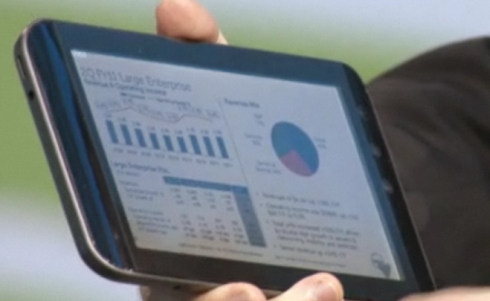 The other day Dell CEO Michael Dell teased us with a brief glimpse at a new 7 inch tablet that looks like it could be a bit more than just a larger version of the Dell Streak 5 inch Android tablet. While the new model will also run Android, the larger display looks like it might have a higher resolution and it’s not yet clear whether it will have two cameras. It’s also not yet clear whether the tablet, like the Streak, will be able to make phone calls — although I’d be surprised if it didn’t at least have a 3G modem for mobile broadband data connections.

Engadget has snagged a video of Dell showing off a prototype at a recent event, and they spent a bit of time “enhancing” a few screengrabs so we can get a better look at the tablet.

Unfortunately all we can tell is that there’s a volume rocker, a headphone jack, and a few other buttons on the sides, as well as your usual Android buttons on the front for navigating through Google’s mobile operating system.