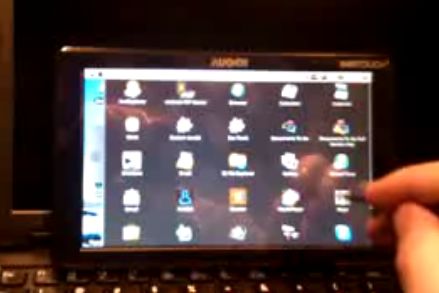 I’ve had a little more time to play with the Augen GenTouch78 Android tablet, and here’s the deal: It’s a mixed bag. You can check out my hands-on video after the break, but here’s the short version:

On the one hand the build quality is pretty decent and the tablet feels good in the hand. It has a decent looking display and runs Android 2.1.

On the other hand, entering text or even tapping on icons with the resistive touchscreen display is a bit of a chore. The memory card slot reads “TF card,” which should mean TransFlash and which should support microSD cards. But when I tried inserting a microSD card, it fell into the slot and almost got lost before I grabbed a pair of tweezers to free it. I’ll try again later in case I was putting the card in the wrong way, but I’m going to hold off until I have a spare microSD card that I’m willing to lose.

Update: Impatience got the better of me and I tried inserting the 4GB microSD card from my phone again. It turns out it does fit, but you have to line it up very carefully or it will fall into a gap. Once the SD card was loaded, I was able to successfully install an app using the APK installer file that was stored on the memory card.

Overall, I haven’t decided whether I can in good conscience recommend this tablet yet. It can run Android apps — but text input is painfully slow and inaccurate compared with the experience on most Android powered phones. Once you set up the web browser with bookmarks for your favorite sites, that might matter too much since you might not need to enter text too often. But I wouldn’t want to spend a lot of time composing email messages on this device.

Some apps also take a ridiculously long time to run. For instance, toward the end of the video below you can see what happens when I try to launch the YouTube app. Once it’s up and running, videos look great on the 7 inch display. But it felt like an eternity passed between the time I pressed the YouTube button and the time the video browser opened.

The display is also stuck in landscape mode — which would be fine if there weren’t some apps that were clearly designed for use in portrait mode. I’m guessing there’s a third party utility somewhere that will let you rotate the display. But out of the box there’s no way to rotate the screen by tilting the display or pressing a button.

Oh, and I was very surprised to see a Skype icon on the home screen. Once I signed in with my Skype credentials, I tried to place a VoIP call to a friend — only to receive a message saying my carrier doesn’t support voice calls. Of course, this tablet is WiFi only and there is no carrier. My guess is that Augen just snagged the Skype app that’s already available for Verizon-based Android phones and threw it on here without bothering to make sure it was fully functional. On the bright side, you can send instant messages to your SKype contacts…

Now for some video.

36 replies on “Closer look at the Augen GenTouch78 user interface”