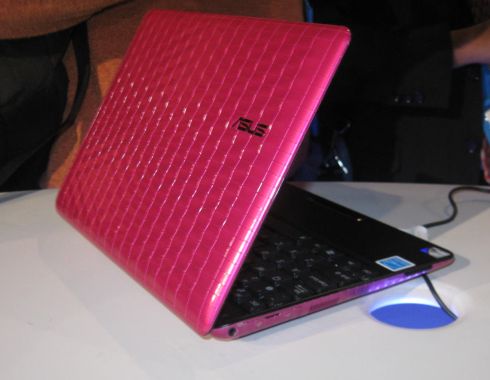 I got a chance to spend a few minutes with the new designer netbook from Asus. The Eee PC 1008P Karim Rashid Edition is pretty much a standard Pine Trail netbook for the most part, but it’s one of the first designer edition netbooks I’ve seen that has a pattern that not only incorporates the lid and keyboard area, but also the base of the computer.

And eagle-eyed Joanna Stern from Engadget noticed something that I missed: The designer edition has a removable 3 cell battery. Up until now, all Asus Eee PC 1008-series netbooks had built in batteries that could not easily be removed by users, which makes the batteries a pain to upgrade or replace.

You can check out a video of the new battery at Engadget. And there are more shots from the news conference as well as some promotional shots after the break.