The Archos TV Connect is a box you can plug into a TV to run Android apps on a big screen. We’ve seen a lot of those in the past year. But the Archos model is designed to sit on top of a TV, points a webcam at you for Skype and other applications, and comes with a kind of ridiculous, kind of awesome Bluetooth remote for navigating Android on your TV. 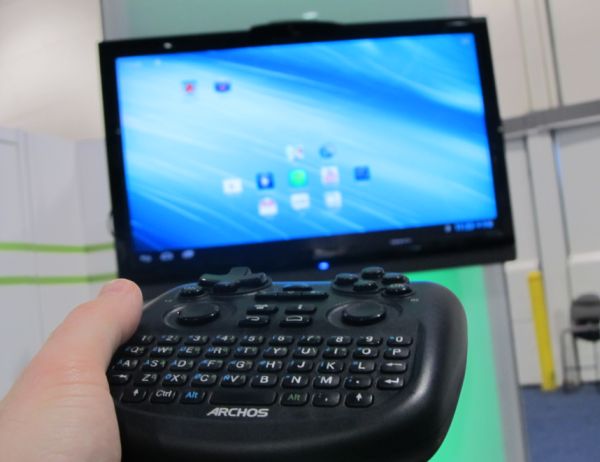 Archos is also calling the $129 TV Connect the first officially Google Certified device of its type… although lack of official certification doesn’t seem to have stopped white box Chinese device makers from loading the Play Store on their TV sticks. Still, most big-name device makers use Google TV rather than Android for this sort of device.

While it’s largely the remote and camera that make the Archos box stand out, it also features media center software from Archos. While the media apps were originally designed for tablet-sized devices, they look pretty great on full screen TVs, and offer a few nice touches such as the ability to automatically download movie poster artwork from the internet.

I’m also hopeful that the Archos TV Connect won’t suffer from the flaky WiFi we see from many cheaper Android TV sticks. But if you do have WiFi issues you can always connect to the internet using the box’s Ethernet jack. There’s also a USB port which you can use for extra storage, to plug in a mouse or keyboard, or even to use an Xbox controller or other gamepad.

The TV Connect has a 1.5 GHz TI OMAP 4470 dual-core ARM Cortex-A9 processor, 1GB of RAM and 8GB of built-in storage. It’s running Android 4.1 Jelly Bean and features the Google Play Store. You can use it to watch Netflix, stream videos over your home network, or play games on your TV. 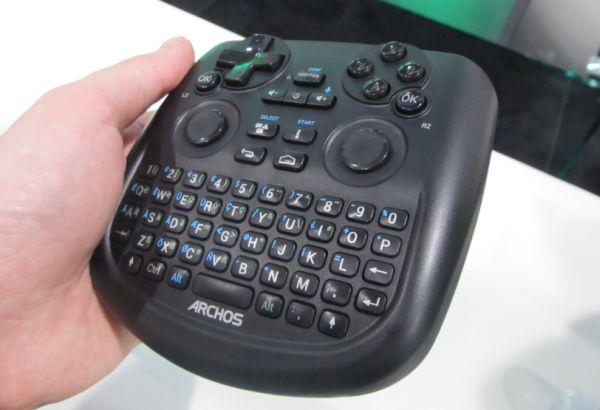 While the remote control looks like a bit of a beast, it’s actually fairly light and fits comfortably in your hands… plural. It’s a two-hand controller that’ll be kind of tough to use with a single hand.

But Archos offers several different ways to use the controller. There’s a built-in QWERTY keyboard for entering text, an air mouse function that lets you wave around the remote to move an on-screen cursor, and arrow buttons that let you select apps.

You can also use the direction pads and other buttons to for gaming, or use both analog sticks for pinch-to-zoom and other multitouch gestures such as rotating a map or picture.

You can check out the TV Connect in action in one of my shakiest videos yet from this year’s CES. Bear in mind that the CES show floor is filled with wireless devices, which is why the Bluetooth remote kept losing its connection to the TV box.