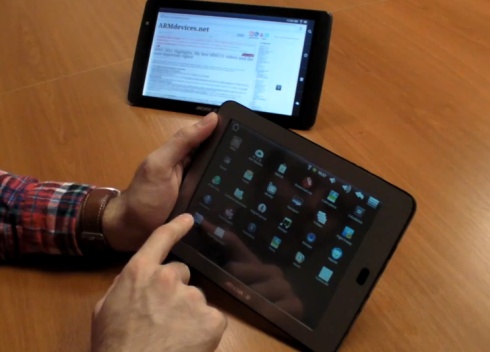 Two new budget tablets from Archos have been making the rounds recently, first popping up in Russia, and then on the FCC web site. Now Charbax has gotten some hands-on time with the Archos Arnova 8 and Archos Arnova 10 tablets and he’s posted a few videos.

In a nutshell, these tablets are designed to be cheap, but fairly capable devices. They’re not going to replace a Motorola XOOM anytime soon. They have slower processors, lower resolution displays, and cheaper components. They lack 3G and don’t run Google Android 3.0. But if you’re looking for a tablet primarily for surfing the web, watching videos, or reading eBooks, those things might not matter.

Charbax says the Archos Arnova 10 currently has a 600 MHz processor and resistive touchscreen, but the goal is to upgrade the specs to a 1 GHz ARM Cortex-A8 Rockchip RK2918 processor and a capacitive touchscreen by April, while selling the tablet for $199 in the US or about 199 Euros in Europe.

The 8 inch tablet weighs about 1.1 pounds and has a built-in mic and speakers, microSD card slot, g-sensor, and 4GB of storage.

You can check out hands-on videos from ARMdevices after the break.

6 replies on “Closer look at the Archos Arnova 8, 10 tablets”