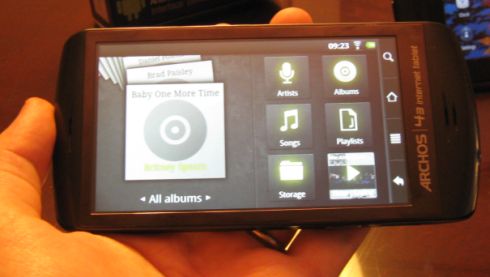 The Archos 43 is a new Android tablet with… you guessed it, a 4.3 inch display. It sits smack dab in the middle of the 5 Android tablets Archos introduced last week in terms of both size and features. Like the Archos 28 and 32, this 4.3 inch model has a resistive touchscreen. But like the Archos 70 and 101 it has a zippy 1GHz ARM Cortex A8 CPU.

Like all of the new Archos tablets, the Archos 43 makes a pretty decent portable media player. It can handle a wide range of audio and video formats, including MP4, H.264 and WMV files with resolutions up to 720p. Archos is also working with companies including Roxio and Amazon to add support for DRM so that you can purchase and/or rent videos to watch on the portable device in the future.

The Archos 43 fits comfortably in the hand and while it has a resistive display instead of capacitive, it’s quite responsive to touch either from a fingertip or a stylus. Entering text is definitely easier with a stylus, but since this model has a larger display than the Archos 28 and 32, you may have a bit more success tapping away with your thumbs.

The handheld tablet has an 854 x 480 pixel TFT LCD display and a 3D graphics accelerator. It also includes HDMI output, USB connectivity, 802.11b/g/n WiFi, Bluetooth 2.1, a G-sensor, built in speaker and mic and a built-in kickstand. It comes with 8 or 16GB of internal storage and theres a Micro SD card slot for extra storage. This model has a 2MP camera which can shoot 720P video.

The Archos 43 measures 5.3″ x 2.6″ x 0.4″ and weighs 4.6 ounces. While the 4.3 inch display is about the same size as the screens on some of the largest Android smartphones available, the Archos 43 still feels just a little larger than a phone, thanks to the wide plastic case around the edges of the device. Still, it fits comfortably in your hand and the large display would make this tablet a pretty good portable video player or eBook reader.

The Archos 43 is expected to run about $$199 when it’s released in October. It will run Android 2.2 Froyo, but the version I saw was running Android 2.1. You can check out some more hands-on photos and press shots after the break.

18 replies on “Closer look at the Archos 43 Android tablet”