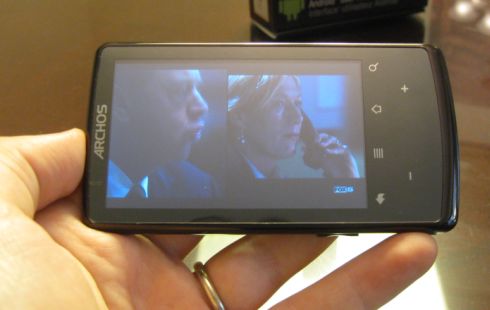 The Archos 32 is a handheld device running Google Android. It has a 3.2 inch display and a super-slim design. It’s one of 5 Android tablets and handheld devices Archos introduced recently, and while it’s a little bigger than the 2.8 inch Archos 28, the Archos 32 still looks more like a phone than a full sized tablet.

I find that it’s best to think of this little guy as a media player that’s capable of running apps instead of thinking of it as a full-sized tablet. The resistive touchscreen is quite responsive when it comes to browsing the web or launching applications, but entering text with the on-screen keyboard is a bit of a chore. And while the new Apple iPod touch which starts shipping this week can run 250,000 third party apps from the iTunes App Store, Archos bundles the Archos 32 with the AppsLib store which has just about 5,000 Android apps — although you may be able to install other apps from the Android Market with a little bit of elbow grease.

The Archos 32 will run about $149 when it starts shipping in a few weeks, and if you’re wondering why you’d spend the extra $50 to get this model instead of the Archos 28, it turns out the screen size isn’t the only difference. The Archos 32 also has a slightly higher resolution screen, a camera, video output capabilities, and ships standard with 8GB of flash storage. Like the other Archos tabelts, it can also handle a wide range of audio and video formats including H.264, MP4, WMV, MP3, WMA, AAC, FLAC, and OGG Vorbis.

The handheld device has an 800MHz ARM Cortex A8 processor with support for 3D graphics and 720p HD video playback. The Archos 32 has a 400 x 240 pixel 3.2 inch TFT LCD display. It has a VGA camera which can take still shots or record VGA video. There’s a G-sensor which automatically rotates the display when you reposition the handheld. It also helps out with video games. There’s also a USB port, composite video output for connecting to a TV, 802.11b/g/n WiFi, and Bluetooth 2.1.

If you scroll about 7 and a half minutes into the video after the break, you can see Archos VP Ron Ferguson demonstrate the video output capabilities of this device. While the composite video output looks a little silly on a big, HD television set, the overall gaming experience is quite decent. I’m also impressed at how Archos designed its tablets to function as touchpads when you plug in an external display, making it easy to interact with the Android interface on a big screen.

The Archos 32 is now shipping — making it the first of the new Android devices from Archos to show up in the Archos Store. It currently ships with Android 2.1, but an Android 2.2 update should be available in October.

4 replies on “Closer look at the Archos 32 Android handheld”