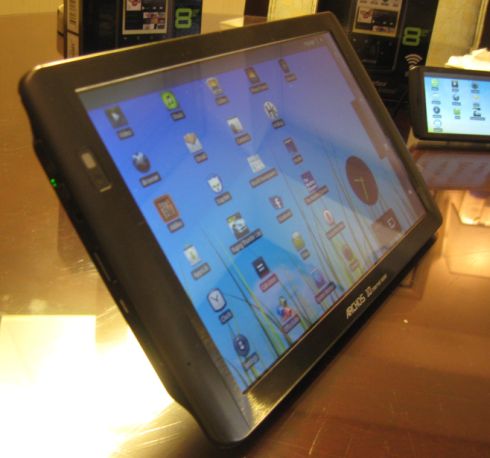 The Archos 101 is the largest and most powerful new Android tablet from Archos. It has a 10.1 inch, 1024 x 600 pixel capacitive touchscreen display, a 1GHz ARM Cortex A8 processor, and HDMI output. Yet this tablet measures just 0.47 inches thick and weighs just under a pound.

Archos introduced 5 new tablets last week, and with a starting price of $299.99 this one is the company’s most expensive model. That said, it’s still about $200 cheaper than a WiFi-only Apple iPad.

So what do you get for your money? The tablet runs Google Android 2.2. Unfortunately the Android 2.2 keyboard doesn’t really scale all that well to larger displays, so while thumb-typing in portrait mode is reasonably comfortable, I found text entry in landscape mode to be a bit awkward.

That said, Archos is quite proud of the built-in kickstand which lets you easily prop up the tablet at a comfortable typing angle (despite the awkward keyboard) without any third party accessories. Throw in a Bluetooth keyboard and typing should actually be quite pleasant.

Spec-wise, the Archos 101 actually stacks up pretty well against the iPad. The Archos tablet has a 1GHz CPU, 3D graphics acceleration, 802.11b/g/n WiFi, Bleutooth 2.1, a front-facing VGA camera, built-in mic and speakers, and a G-sensor. The tablet has a mini HDMI port for connecting to a monitor or HDTV, a full sized USB port, and support for a wide range of audio and video codecs inclduing WMV, VOB, MKV, FLV, DivX, and Xvid as well as MP3, WMA, AAC, WAV, FLAC, and OGG Vorbis.

On the other hand, the iPad ships with access to 250,000 iOS apps in the App Store. The Archos 101 uses the third party AppsLib client, which lets you download about 5,000 Android apps. That’s a far cry from the nearly 100,000 apps available in the Android Market, but Google doesn’t officially let device makers bundle the Android Market or other Google apps such as Gmail and Google Calendar on non-phone devices.

The iPad also has a metal case, while the Archos 101 is made of cheaper plastic.There’s also no 3G capable version of the Archos 101.

Still, as Android tablets go, the Archos 101 is easily one of the best I’ve seen for $300 or under. If you want to keep the iPad comparison going, it’s thinner, lighter, and doesn’t need a dock connector to handle video output. Not that I think any of those things makes up for the missing Android Market, but there are ways around those restrictions.

You can check out more photos after the break.

49 replies on “Closer look at the Archos 101 Android tablet”