Project Tango is a tablet with special sensors that creates 3-D rendering using software that “senses” its surroundings similar to the way we see the world around us. It has a fisheye camera and a depth sensor combined with traditional motion sensors like accelerometer and gyroscope for area learning to create a visually immersive augmented reality experience.

But, augmented reality (which blends virtual objects with real-world environments through the display on your phone, tablet, Google Glass. Our other screen) has been a possibility for a few years, but it hasn’t really taken off in the real world. It is more of a neat trick than a must-have technology. Like other gadgets and design prototypes in Google’s Advanced Technology and Project (ATAP) team, Project Tango is still in early stages, which means the possibilities are both limited and limitless. 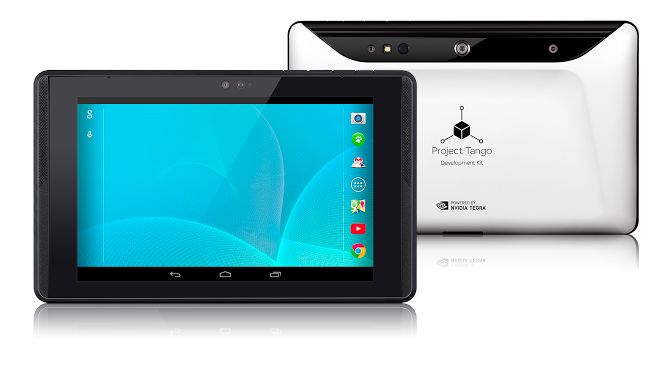 I visited the ATAP’s booth during Google I/O to get a hands-on demonstration of Project Tango. My first thought was, what is it good for?

Patrick from Project Tango showed me software that reads and creates a 3-D version of the world around you. The image can then be used for such possibilities as showing a virtual tour of a house for sale to potential buyers. You could, potentially, use the program to virtually redecorate your living room by removing the couch and replacing it with a new one.

Using the 3-D and motion sensors, Project Tango could, theoretically, be used alongside virtual reality hardware to create 360-degree visuals that you could actually walk through. This, in combination with the Jump technology that Google introduced with GoPro, the experience could be incredibly immersive.

When it comes to gaming, the possibilities grow even more. At Google I/O, gamers were able to try out an augmented reality based first-person shooter. Holding a sniper rifle type Nerf gun, players used the Project Tango tablet as a window into a virtual world where aliens invade. Moving around in the real world allow the players to move through streets and around corners in the virtual one.

Imagine a game center, similar to laser tag, where players could use Project Tango to hunt monsters in a warehouse with nothing more than plain white walls. Thanks to augmented reality, those walls could look like an abandoned factory, or lush jungle.

These are just two examples of how Project Tango could enable both practical applications and entertainment options.

You can get your own Project Tango developer tablet from the Google Store for $512. Google has APIs that provide motion detection, depth sensing, and area learning (which recognizes places that it has been before).

Google and Qualcomm have also announced that Qualcomm will include Project Tango technology on an upcoming smartphone reference design. That doesn’t necessarily mean that you’ll see Tango make its way into consumer smartphones anytime soon, but it could expose more hardware and software developers to the platform, which could pave the way for it to show up in consumer devices in the future.