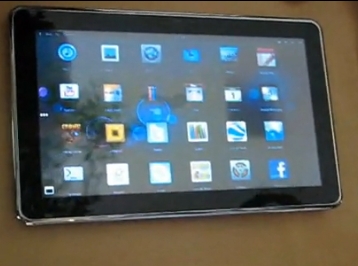 MeeGo is a custom Linux environment designed for netbooks, tablets, smartphones, and other portable devices as well as connected TVs and in-car systems. And while MeeGo v1.0 for netbooks just hit the streets last week, it looks like the developers already have a few other tricks up their sleeve. Yesterday we got a first look at a tablet running a version of MeeGo with a custom touchscreen interface. Today, we have a 7 minute hands-on video taking a closer look at the new UI, courtesy of Chippy at CarryPad.

You can find the video after the page break. But here are some of the highlights.

One thing that I’ve found a bit strange in the netbook version of MeeGo is the fact that the so-called music player is responsible for all multimedia playback, including videos. That seems to be true on the tablet edition as well, since the demonstrator opened the music app to show off the tablet’s 720p HD video playback capabilities. Hopefully the developers will either create a separate video app eventually… or at least rename the software so that it’s called a media player instead of a music player.

You can check out Chippy’s hands-on video below.

8 replies on “Closer look at MeeGo Linux for tablets”