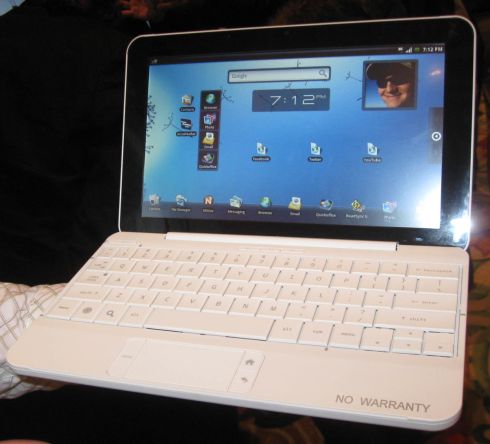 HP hasn’t yet committed to bringing an ARM-based smartbook to market. But the company is showing off a prototype mini-laptop that’s been outfitted with a Qualcomm Snapdragon processor, the Google Android operating system, and some software and case design tweaks to make the whole system more usable.

In terms of case design, at first glance the prototype looks like an HP Mini 110. But that’s really just the keyboard and display. If you look more closely, you’ll see that there are no Fn keys, since they would serve no purpose under Google Android. And instead of your typical left and right buttons on the sides of the touchpad, HP has added buttons for functions such as Home, or Back.

Since there’s no cursor in Google Chrome, the touchpad navigation is also a bit different from usual. For instance, you can swipe to the left or right to switch from one area of you Android desktop to the next. You can also tap the touchscreen display, which might be easier.

HP developed a number of custom applications including a music player and a dock-style application launcher to run on top of Android. Right now the device doesn’t connect to the Android Market to download new apps, but you should be able to install programs you’ve downloaded elsewhere.

While HP says there are no plans to actually mass produce a Snapdragon/Android device, it does look like the company put a bit of time and thought into the project. So I wouldn’t be surprised if we saw this prototype, or something like it, turn into a real product in the not too distant future.

You can check out a few more photos and a video overview of the device after the break.