The FXI Cotton Candy is a tiny computer that’s about the size of a USB flash drive. One one side is a USB port, and on the other is an HDMI connector. And in between there’s a 1.2 GHz Samsung Exynos 4210 dual-core processor, 1GB of RAM, and ARM Mali 400 graphics.

It’s been a little over a year since FXI first introduced the Cotton Candy, and in that time we’ve seen dozens of cheap Android devices that you can plug into a television, some costing less than $50. But FXI charges $199 for the Cotton Candy.

I caught up with FXI CEO Borgar Ljosland recently and had a chance to ask him what sets the Cotton Candy apart.

Surprisingly, Ljosland actually seemed excited when I brought up the competition. That’s because they’re helping to popularize the idea of a portable device that you can plug into any TV to run Android apps on a big screen.

But the Cotton Candy does a few things that most of those devices don’t.

First, FXI calls its device an “any screen” computer. That’s because it doesn’t just work with televisions or monitors. You can also plug it into a Mac, Windows, or Linux computer to run Android apps on a PC. Sort of.

What actually happens is that the computer treats the Cotton Candy as a standard USB drive. But on that drive there are apps for OS X, Linux, and Windows that launch virtualization software, letting you basically login remotely to the Cotton Candy without leaving your desktop environment.

In other words, it’s still that Exynos processor and Mali Graphics chip that’s doing the heavy lifting, not your computer’s processor. Any apps you’re using are runnin on the stick. But you’ll see them in a window on your computer. The process is pretty seamless and Android apps looked pretty responsive in the Mac and Windows computers Ljosland showed me.

Another thing that helps set the Cotton Candy apart is that it’s not limited to running Android. We’ve seen plenty of independent developers port Ubuntu and other Linux distributions to run on cheap mini PCs like the MK802. But FXI officially supports Ubuntu as well as Android 4.0.

So if you buy an FXI Cotton Candy stick, you have a choice of using it to run Ubuntu or Android. Right now that means Android 4.0 or Ubuntu 12.04, although FXI could release updates for either operating system… or independent developers could do the same. 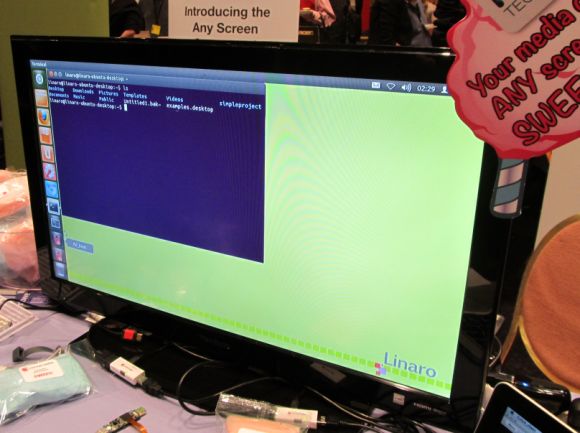 Right now, Ljosland says there are 160 different companies trying out the Cotton Candy, either to see if they can use it in their businesses or to develop applications that run on top of it.

At this point, the company is targeting the device at developers, which is another reason for the $199 price tag. Anyone can pick up the stick-sized-computer and use it for non-development purposes, but it’s not really meant to be a consumer device just yet.

On the other hand, if you’re a company with a large number of employers that may need to use different computers at different locations, this sort of solution would let you give each user a computer that they can fit in their pocket. It would store all of their files, settings, and apps, and they could pick up where they left off by plugging the device into any PC or display. 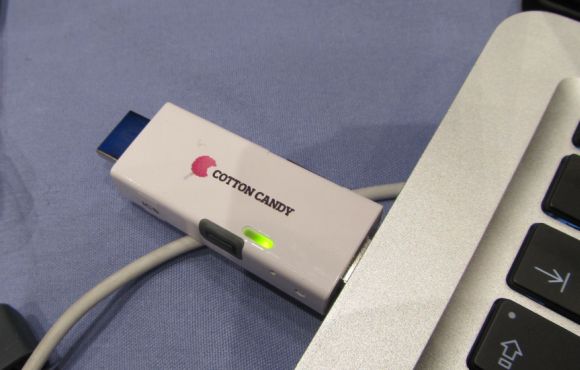 Ljosland also seems convinced that the Cotton Candy offers better performance than many of the cheap Chinese sticks we’ve seen, but that’s probably a matter that’s up for debate. It basically has the same guts as a Samsung Galaxy S II smartphone, which is a bit dated at this point.

The stick features WiFi and Bluetooth support and FXI ships it with an 8GB microSD card — which is the only storage the Cotton Candy has. There’s no built-in storage space.

Here’s a recap of what you get with the $199 Cotton Candy stick:

You can keep up with the software development, and see more of what people are doing with the Cotton Candy in the FXI forums.