In other words, if your phone battery is dying and your tablet is choc full of juice, you can use it to charge your smartphone. But that’s just the beginning. 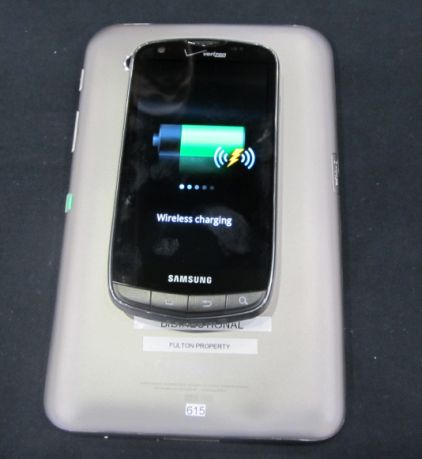 Technically the system supports 2-way charging. That means that if your phone actually has more juice than your tablet, you can charge the tablet using your smartphone’s battery — and the system can automatically detect which direction to send the power in.

Another thing you can do once you add the ability to use your phone or tablet as a power source is use it as a wireless battery for other devices.

For instance Fulton is showing off a musical poster which can draw power from a tablet battery. Just place the tablet near the part of the poster that draws energy and you can tap out musical notes on the poster. Remove the tablet, and it dies just as if you had removed a normal battery pack.

Fulton isn’t selling its wireless charging system directly to consumers, but is instead showing off technology that it could license to phone, tablet, and other device makers in the future. So eventually we could see mobile products that can share their battery charges wirelessly.

Since the system is compatible with the Qi wireless charging standard, if you ever buy a tablet with the Fulton Innovation technology and happen to have a Qi-compatible phone, they’ll work together.