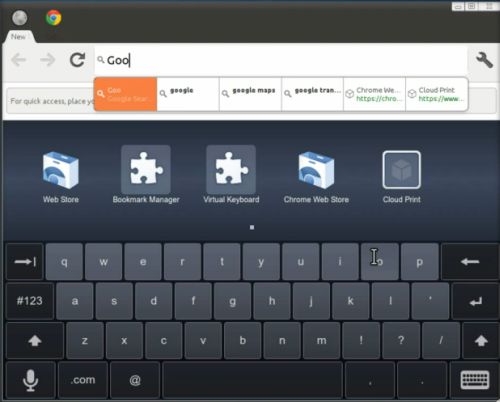 Google’s Chrome OS is an operating system designed to put a web browser front-and-center. Laptops running the operating system (also called Chromebooks) boot in just about 10 seconds and the first thing you see after logging in is a browser window. But while Google is targeting notebook computers first, some of the folks behind Chrome OS are also working on a tablet user interface.

We got a first look at the tablet version of Chrome OS a few months ago. Now web developer François Beaufort has compiled the latest software build and posted a video showing how the operating system will look on tablets.

The first thing that strikes you about the tablet version of Chrome OS is that everything looks bigger. The icons, text, location bar, and other elements are all sized so that you can tap them with a fingertip rather than a mouse pointer.

There’s also an on-screen keyboard which is a necessity on touchscreen devices since there’s no physical keyboard for entering text. The Chrome OS keyboard actually looks a lot like the keyboards found on the Samsung and Acer Chromebooks, with big keys that have slightly rounded edges.

When you go to enter a web address or search term in the location bar, suggestions show up below the screen. But instead of the typical drop-down menu view, the suggestions are laid out in a horizontal row with nice, big finger-friendly buttons.

The project is still a work in progress, and there’s no word on if or when Google will officially support Chrome OS tablets. For now if you want to test the software you’l need to compile the open source version of Chrome OS with support for touch input on your own.

One reply on “Closer look at Chrome OS for tablets: video”